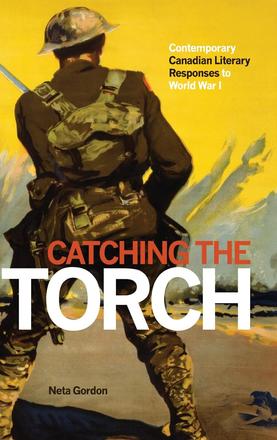 Excerpt from Catching the Torch: Contemporary Canadian Literary Responses to World War I by Neta Gordon

David
Williams asserts that the continued interest of Canadian writers in the First
World War has nothing to do with the myth that our nation was born in the
trenches. Daniel Francis states that Ã¢â‚¬Å“if a nation is a group of people who
share the same illusions about themselves, then Canadians need some new
illusions,Ã¢â‚¬Â 87 which may
very well be the case. That said, there is simply too much discourseÃ¢â‚¬â€ in history
books, in the press, in literature, and in literary criticismÃ¢â‚¬â€ promoting
precisely that myth about national origin for us to dismiss out of hand its
current hold on Canadian imaginations. The question then becomes: What kind of
Canada was born in the war, at least according to the new literary reimaginings
of that series of events? In his conclusion to Death
So Noble, Vance argues that for postwar Canadians,
the


legacy
. . . [was] not of despair, aimlessness, and futility, but of promise, certainty,
and goodness. It assured Canadians that the war had been a just one, fought to
defend Christianity and Western civilization, and that CanadaÃ¢â‚¬â„¢s sons and
daughters had done well by their country and would not be forgotten for their sacrifices.
To these great gifts, the myth added the nation-building thesis. By encouraging
people to focus their thoughts on a time when the nation appeared to be united
in a common cause, the memory of war could prove that the twentieth century did
indeed belong to Canada.88

Unsurprisingly,
this legacy has not been entirely sustained. Though most of the authors writing
about the war to a much greater extent than Findley consider the specifically
Canadian experience in the war, that focus has not resulted in a wholesale
abandoning of the idea that many lives were destroyed due to the incompetence
of military officers, the greed of war profiteers, and the stupidity of
government officials. For example, HodginsÃ¢â‚¬â„¢s Broken
Ground critiques the failures of the Soldier
Settlement Act, while UrquhartÃ¢â‚¬â„¢s The Stone Carvers and CumynÃ¢â‚¬â„¢s The Famished Lover both disparage the work of the Department of SoldiersÃ¢â‚¬â„¢ Civil
Re-establishment in dealing with issues of veteran employment and pensions.
Furthermore, the idea of Ã¢â‚¬Å“Western civilizationÃ¢â‚¬Â and a unified nation is
interrogated, as works like ThiessenÃ¢â‚¬â„¢s Vimy and BoydenÃ¢â‚¬â„¢s Three Day Road consider the previously marginalized stories of francophone
and First Nations participation, while Broken Ground, The Stone Carvers, and Unity (1918) explore the motley of immigrant communities on the home
front who try to make meaning out of war. The idea that the war Ã¢â‚¬Å“had been a
just oneÃ¢â‚¬Â is, in a certain way, countered with depictions of war activityÃ¢â‚¬â€ whether
on the battlefield or in field hospitalsÃ¢â‚¬â€ that almost uniformly portray horror,
chaos, and the agonizing loss of life. Finally, many worksÃ¢â‚¬â€ most explicitly SwanÃ¢â‚¬â„¢s
The Deep and PoliquinÃ¢â‚¬â„¢s A
Secret Between UsÃ¢â‚¬â€ confront the possibility that those who
participated in the war may indeed be either forgotten or, at least, remembered
in ways that have more to do with the needs of the living than the acts of the
dead.

Yet
despite the ways contemporary Canadian First World War fictions affirm the
general Western narrative associated with the fighting of the warÃ¢â‚¬â€ that it was a
futile, costly, dreadful military exerciseÃ¢â‚¬â€ VanceÃ¢â‚¬â„¢s seemingly hyperbolic
declaration about Ã¢â‚¬Å“promise, certainty, and goodness,Ã¢â‚¬Â also finds purchase. To
be sure, the reconciling of competing narratives is often a delicate activity
and sometimes a heartbreaking one, for authors and readers are faced with the
impossible question: Was itÃ¢â‚¬â€ the horror, the chaos, the lossÃ¢â‚¬â€ worth it? Not one
of the works I explore here culminates in pessimism or condemnation of CanadaÃ¢â‚¬â„¢s
participation in the First World War, including works like Broken
Ground, The Deep, and A Secret Between
Us, all of which suggest that narratives
that depend on collective remembrance are doomed to recede in cultural
importance, given enough time, because the collective will eventually choose to
remember something else. Most of the works in this corpus might even be called
optimistic in their intimations that the Canada that is born in the First World
War is populated by those given to seeking love, healing, and a sense of hope
and obligation toward community. Many of the narratives this volume examines rehabilitate
the figure of the father and/or a conception of productive masculinity; many
follow in the tradition of early-twentieth-century home front novels by women
to consider the value of female work, in wartime and beyond; many explore
productive ways to think about communicating across cultural and experiential
divides; and most conclude with a look to the future (which is now the present)
and a sense of promise that is decidedly free from irony. Thus, the remembrance
of the First World War that has emerged in the past decade or so reflects a
desire not to destroy the illusions Canadians have or have had about
themselves, but rather to re-examine how those illusions about the war, with
all its attendant horror and misery and loss, might offer a space for
conceptions of the best Canadian self to emerge.

Table of Contents for
Catching the Torch: Contemporary Canadian Literary Responses to World War I by Neta Gordon

Chapter One: The Dead Speak: Considering the Use of Prosopopoeia in Dancock's Dance, Mary's Wedding, and The Deep

Chapter Three: Abandoning the Archivist: Commemorating the War Insider and Outsider in the World War One Novels of Alan Cumyn and Jane Urquhart

Chapter Four: Other Canadians: The Representation of Alternate Versions of the War in Vimy, Unity (1918), Three Day Road, and A Secret Between Us

Conclusion: Representations of the First World War and Wishing

Catching the Torch examines contemporary novels and plays written about Canada's participation in World War I. Exploring such works as Jane Urquhart's The Underpainter and The Stone Carvers, Jack Hodgins's Broken Ground, Kevin Kerr's Unity (1918), Stephen Massicotte's Mary's Wedding, and Frances Itani's Deafening, the book considers how writers have dealt with the compelling myth that the Canadian nation was born in the trenches of the Great War.

In contrast to British and European remembrances of WWI, which tend to regard it as a cataclysmic destroyer of innocence, or Australian myths that promote an ideal of outsize masculinity, physical bravery, and white superiority, contemporary Canadian texts conjure up notions of distinctively Canadian values: tolerance of ethnic difference, the ability to do one's duty without complaint or arrogance, and the inclination to show moral as well as physical courage. Paradoxically, Canadians are shown to decry the horrors of war while making use of its productive cultural effects.

Through a close analysis of the way sacrifice, service, and the commemoration of war are represented in these literary works, Catching the Torch argues that iterations of a secure mythic notion of national identity, one that is articulated via the representation of straightforward civic and military participation, work to counter current anxieties about the stability of the nation-state, in particular anxieties about the failure of the ideal of a national "character. "

"The work is . .. highly convincing in its analysis of how depictions of the war function to shape concepts of the nation and authorial resistance to essentialist understandings of national characters. ... The book' opening literature review will be helpful for many scholars, and, in its narrative development of critical understandings of the way in which the First World War figures in contemporary Canadian literature, Catching the Torch is unlikely to be superseded any time soon. "

"Using McCrae as a point of entry, Gordon proceeds to argue that the works of literature she examines, including Jack Hodgin's Broken Ground, Frances Itani's Deafening, Joseph Boyden's Three Day Road, and Vern Thiessen's Vimy, among others, paradoxically disparage the mass destruction and loss of the First World War while simultaneously insisting on its cultural significance. As a result, instead of questioning the historical record, contemporary literary responses to the First World War, according to Gordon, endorse a national myth that 'promotes the collective by simply enlarging the category of the homogenous,' a tendency that is propelled by an anxiety about the instability of Canadian national identity. As a whole, Gordon's analysis is insightful and compelling. "

"Catching the Torch, which examines numerous recently published novels and plays about Canadians' contributions to the First World War, underscores that war does not always take place during specific time periods or on specifically militarized fronts, but may require redefinition of temporal limits and settings to take into account the tales of traumatized veterans or, as was the case after the Great War, victims of influenza. It further insists that the stories of those previously excised from the canon, such as aboriginals, French Canadians, nurses, women volunteers serving on home fronts and battlefronts, and artists, are valid and valuable. Offering numerous insights into the ways contemporary Canadian writers commemorate their nation's participation in the Great War, this thoroughly researched and cogently argued book promises to be an invaluable resource for students and scholars of literature and history. "

- Donna Coates, University of Calgary, co-editor of Canada and the Theatre of War, vols. I and II