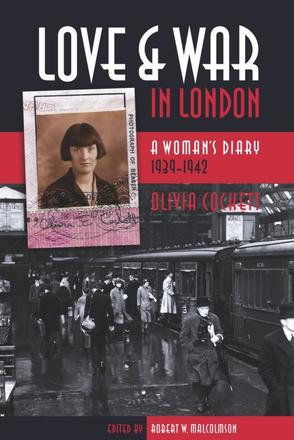 Love and War in London

Excerpt from Love and War in London: A Woman's Diary 1939-1942 by Olivia Cockett, edited by Robert W. Malcolmson

At midnight we went to bed. Gave Gay her breakfast in bed. She went at 11, on [her job] at 2. Mother and Dad went off to the bungalow soon after. I had wanted to go down to Shoreham and walk a bit and sketch. Dithered about, looked up trains, packed a satchel. Am hoping period will arrive today; feel a bit headachy and a bit worried, having made so much “love” this month. Decided to stay home. Spent an hour trying to draw garden from my bedroom window. Believe I am a bit scared of going into the country alone (raids). So am now in the garden in deck chair, lovely warm sun and breeze and trees. Vaguely dislike the sound of planes in the distance, approaching like a headache in the sky. WELL I'M DAMNED--THE SIRENS.

I take my typewriter in and type on the kitchen table. Can hear whistles blowing, planes very close. Bert out on lawn watching, can't see anything. Wonder how far parents have got in the car--silly devils, they've gone down the Thames estuary. Three minutes pause in typing to listen to the swooping planes and hear the machine guns. Run up to my top window and hang out like a fool to stare at the heavenly blue of the sky. Run down again to type. Can hear the planes through my noisy typewriter. More machine guns. A BOMB. Mabel runs down to say “They're dropping bombs Paddy. “ [Olivia was known as “Paddy” to family and friends. ] I say yes and type in the remark. Pause to observe that my typing is rather worse than usual. Heart beating a bit faster. Stop and listen. Planes further off. Neighbours' voices in gardens,”Spitfire,” “Bombs,” “Coming again. “ Zooom. Probably about five miles off--in Croydon direction.

1: 20. Stand at kitchen door and listen. Still machine guns. Type again and wonder if neighbours think the noise is guns--too slow really! Wonder what Man is doing. Dad ought to go on duty. Hope they're in shelter. Lot of noise coming from that river way now. Distinct bomb [noise] closer.

Eight minutes later. The three of us went to the cellar after that close one. Plane seemed right overhead. More bangs. Ran up again for coat--cold down below. Got one of Dad's jackets from hall. Talked about Bert's eyebrows, cows' eyebrows, dogs and cows. Hoped parents and Bert's daughter are at bungalow by now. Swear at Germans. Guess that we were over Berlin last night. Decide the whole war's daft. Mabel says “The public are demanding so--that they should hit Berlin--but it's not worth losing lovely men for. I say “Seems quiet again now” and come up to the kitchen and type that bit and go to lav. Still no sign of period, but perhaps this will bring it on. . . .

From The Diary-- Part III, Bombs, Busyness, and Hoping for Babies September 1940-October 1942

There's no word I can start off with to give the mood of these ghastly days and nights of bombs on London. In a way it's not yet as bad as I feared. Yet that it has come at all tears away good from life. And makes good all the more important. I've not lost my nerve--yet. Had a good cry one day last week and sent off a bulletin ending hysterically. Now, my nerves are steady after seeing one strong man I know crumple up and cry like a baby after living through those two nights and Saturday afternoon [September 7] in Rotherhithe near the Docks. (There are terrible explosions going off somewhere still, 30 minutes after the OK of the second afternoon raid. Books have just slid off the desk here, and the house shudders. )

Material record. Sunday night I put out an incendiary beside the coal cellar. Monday night a high explosive at the end of the garden brought all the walls down and made a crater ten feet deep and thirty in diameter. Of course broke a lot of windows. No casualties. Have mended windows with cardboard and also those of lone lady opposite. Reported damage. Have had no official notice taken at all. The Ministry of Information local boards have a notice: local damage, two houses hit, no casualties. Bloody farce. There are literally hundreds of houses down in this borough of Deptford. (During these last few minutes planes have gone over. Now I can hear bombs going off, but there is no warning. )

Luckily I am on leave this week. Should have been walking in Buckinghamshire--am very glad to be at home. Have tried to get in touch with the office, but since Monday morning the trains have not run and the phone is off. They can get me if they want me. I'm not going if I can help it.

Every night we have been in the cellar. I cannot sleep, especially since I was the only one awake to hear the incendiary bomb and was able to put it out within two minutes of landing. I daren't sleep now. I roam around the house and garden and keep going back to the cellar when the lights are overhead, and report progress to the other ten. Yes, ten in that little cellar now. A cousin of 40 with his Mother over 70 have come to us from the riverside, only just in time. Came late one evening through a raid and that night their flat was wrecked. And sister-in-law with 2-1/2 year-old Michael come each night. Brother a hero in the AFS, doing rescue work and laughing and joking and looking 20 years older in three days, during which he had seven hours off duty.

Since last Saturday I've not been more than a half mile from home. Have seen two churches, six houses, wrecked; windows out of about two hundred; traces of 15 incendiary bombs. The terrible fires I see from my high window along the river valley will haunt me forever. . . .

In her response to Mass-Observation's December Directive. . . Olivia reflected on her feeling about the coming year as war unfolded over her head.

How do I feel about 1941? I stopped typing for two minutes to listen to an extra noisy enemy plane. It dropped a bomb which puffed my curtains in and made the house shiver (I am in bed under the roof) and now the guns are galoomphing at its back. There are craters at the bottom of my garden, and a small unexploded bomb. Four windows are broken. Can see the ruins of 18 houses within five minutes walk. Have two lots of friends staying with us whose homes have been wrecked.

About 1941, I feel that I shall be damned glad if I'm lucky enough to see it at all--and that I'd rather like to see it. Still kid myself that I prefer quality to quantity. And that the quality will depend more on how I take it than on what is dished out. That's how I feel, cheerful at rock bottom. But I THINK differently, think we'll be hungrier (haven't been hungry yet), think many of our young men will die abroad. Have a cousin in the Navy, another in Ireland, a friend in the HAA [Anti-Aircraft], two more in the RAF. Think it unlikely they”ll all be alive next Christmas. THINK this war is bloody silly. FEEL we must down Hitler etc. (Another bomb puffs the curtains--bad night tonight it seems. ) THINK I ought to go down to the cellar. FEEL I am warm and happy in bed. But I don't see enough sense in long-term policies or prospects to make it worth while giving up the certain present warmth for the uncertain chills of uncertain safety.

Table of Contents for
Love and War in London: A Woman’s Diary 1939–1942 by Olivia Cockett and edited by Robert Malcolmson

Olivia Cockett as a child

Olivia Cockett as a young woman

Olivia Cockett in her mid-thirties

Olivia Cockett was twenty-six years old in the summer of 1939 when she responded to an invitation from Mass Observation to “ordinary” individuals to keep a diary of their everyday lives, attitudes, feelings, and social relations. This book is an annotated, unabridged edition of her candid and evocative diary.

Love and War in London: A Woman’s Diary 1939-1942 is rooted in the extraordinary milieu of wartime London. Vibrant and engaging, Olivia’s diary reveals her frustrations, fears, pleasures, and self-doubts. She records her mood swings and tries to understand them, and speaks of her lover (a married man) and the intense relationship they have. As she and her friends and family in New Scotland Yard are swept up by the momentous events of another European war, she vividly reports on what she sees and hears in her daily life.

Hers is a diary that brings together the personal and the public. It permits us to understand how one intelligent, imaginative woman struggled to make sense of her life, as the city in which she lived was drawn into the turmoil of a catastrophic war.

``A rich medley of voices skilfully blended in an absolutely compelling story, both personal and historic. Olivia Cockett writes with lively and critical intelligence as a contributor to Mass-Observations inquiries into the lives and opinions of ordinary people, and with humour and passion in her own private diaries about her secret love affair with a married man, her family life, her friends, and her keen desire for children. Malcolmson's deft editing blends Cockett's voice with others from the period to create a vivid sense of Londoners preparing for war, coping with gas masks, blackouts, shortages, cold, and then the blitz, Cockett all the while hating violence but refusing to hate Germans, loving music and flowers and friends, finding that the Blitz tears away the good from life--and makes the good all the more important. ''

``Olivia was a remarkable young woman, feisty, articulate, intelligent and emancipated, a lover of books and classical music. ...Her exemplary editor, Robert Malcolmson. ..retrieved the original manuscript from M-O's [Mass Observation's] files at Sussex University. Quite why no one before him saw its potential is a mystery, but he and his university press deserve our thanks for polishing and publishing a classic. ''

``Olivia Cockett's detailed three-year diary written between August 1939 and October 1942 is unusual in its length, its literary quality, and its level of detail and openness. ... [Her] writing is vibrant and engaging. .. She writes, as Malcolmson points out, not only of the facts, but of the feelings of wartime, revealing how public and private experiences were closely entangled. ''