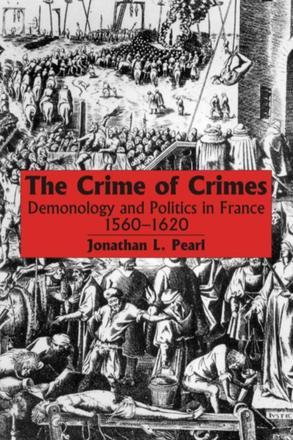 The Crime of Crimes

Table of Contents for
The Crime of Crimes: Demonology and Politics in France, 1560–1620 by Jonathan L. Pearl

Four: The Jesuits, Maldonat and the Development of French Demonology

One of the most intriguing, and disturbing, aspects of history is that most people in early modern Europe believed in the reality and dangers of witchcraft. Most historians have described the witchcraft phenomenon as one of tremendous violence.

In France, dozens of books, pamphlets and tracts, depicting witchcraft as the most horrible of crimes, were published and widely distributed. In his book, The Crime of Crimes: Demonology and Politics in France, 1560-1620, however, Jonathan Pearl shows that France carried out relatively few executions for witchcraft. Through careful research he shows that a zealous Catholic faction identified the Protestant rebels as traitors and heretics in league with the devil and clamoured for the political and legal establishment to exterminate these enemies of humanity. But the courts were dominated by moderate Catholics whose political views were in sharp contrast to those of the zealots and, as a result, the demonologists failed to ignite a major witch-craze in France.

Very few studies have taken such a careful and penetrating look at demonology in France. The Crime of Crimes: Demonology and Politics in France, 1560-1620 sheds new light on an important period in the history of witchcraft and will be welcomed by scholars and laypersons alike.

``The author of The Crime of Crimes provides his readers with a substantial and well-organized historical analysis by which is cast a refreshingly original point of view on the works of the demonologists and, more generally, on France's judicial elites in the sixteenth and seventeenth centuries. ... What emerges from this convincing and well-researched study is the image of a divided political, cultural, and judicial elite. ... The Crime of Crimes will be of great interest to all scholars specializing in demonology, witchcraft, and judicial history. Jonathan L. Pearl's limpid style and skillful argumentation also make it accessible to all those who are interested in early modern history and culture. ''

``Pearl brings to bear on the subject basic sources as well as a meticulous examination of existing relevant literature. His presentation is lucid, and his disagreement with other critics is not only expressed with restraint but also rests on irrefutable evidence. This study is a very important contribution to the history of demonology in France. ''