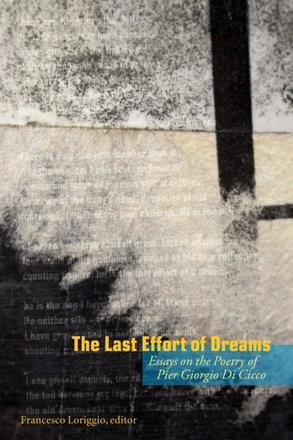 The Last Effort of Dreams

Essays on the Poetry of Pier Giorgio Di Cicco

Table of Contents for
The Last Effort of Dreams: Essays on the Poetry of Pier Giorgia Di Ciccio, edited Francesco Loriggio

We Sat on the Demoted Steps of Heaven: Some Memories of Pier Giorgio Di Cicco | Albert F. Moritz

Philosophy and Music in the Art of a Poet | Yaroslav Senyshyn

Works By and About Di Cicco: A Bibliography | Vera F. Golini

William Anselmi teaches in the department of Modern Languages and Cultural Studies at the University of Alberta. His latest book, coauthored with Kostas Gouliamos, is Happy Slaves: A Duologue on Multicultural Deficit (2005).

Robert Billings published several volumes of poetry, among which The Elizabeth Trinities, A Heart of Names, and The Revels. In the mid-1980s he was one of the editors of Poetry Canada Review. He died in 1986.

William Boelhower is Robert Thomas and Rita Wetta Adams Professor of Atlantic and Ethnic Studies at Louisiana State University, Baton Rouge. He is also an editor of the Routledge journal Atlantic Studies and the Routledge series on Atlantic Studies. He has translated several books, including Selections from Cultural Writings of Antonio Gramsci (1992), Lucien Goldmann’s Method in the Sociology of Literature (1980), and the immigrant autobiography of Carmine Iannace, The Discovery of America (2000). His most recent works include Autobiographical Transactions in Modernist America (1992) and The Future of American Modernism (1990). He is also the co-editor of Adjusting Sites: New Essays in Italian American Studies (1999); Multiculturalism and the American Self (2000); Public Space, Private Lives: Race, Class, Gender, and Citizenship in New York 1890–1929 ( 2004) and Working Sites: Text, Territory and Cultural Capital (2004).

Mary di Michele, poet, novelist, essayist, is a full professor teaching at Concordia University in Montreal. She is the author of eight books of poetry, including a “selected poems,” Stranger in You (Oxford University Press) and two novels. Her latest book, Tenor of Love, a novel, was published by Viking Canada and has circulated internationally.

Vera F. Golini is a professor of Italian Studies at St. Jerome’s University (federated with the University of Waterloo). She has published on Italian and Italian Canadian literature in various scholarly journals in Canada and abroad, as well as in anthologies. Recently she co-edited Theatre and the Visual Arts, and completed and published the first English translation of Dacia Maraini’s My Husband (Wilfrid Laurier University Press, 2004). Her afterword to Italian Canadian Voices: A Literary Anthology 1946–2004 appeared in 2005 and her study of Mary di Michele is forthcoming. She is currently serving as past president of the Canadian Society for Italian Studies and is the recipient of the 2004 Distinguished Teaching Award from the University of Waterloo.

Dennis Lee lives in Toronto, where he was the city’s first Poet Laureate—a post currently filled by Pier Giorgio Di Cicco. Lee’s most recent collections are Un and SoCool. He edited Living in Paradise, Di Cicco’s new and selected poems, where the essay included in this anthology appeared as an afterword.

Francesco Loriggio teaches Italian and Comparative Literature at Carleton University, Ottawa. He has published extensively on literary theory, modern Italian literature, and Italian Canadian literature. He is the translator of Achille Campanile’s The Inventor of the Horse and Other Short Plays and the editor of Social Pluralism and Literary History.

Albert F. Moritz’s poetry has won many international honours, including the Guggenheim Fellowship and the Award in Literature of the American Academy and Institute of Arts and Letters. He is co-author, with Theresa Moritz, of biographies of Stephen Leacock and Emma Goldman, and of the Oxford Literary Guide to Canada.

Yaroslav Senyshyn is professor of Philosophy of Music and Aesthetics at Simon Fraser University. As a pianist he has performed in major concert halls throughout the world. The Washington Post referred to him as a pianist of “enormous power” and “sophisticated finger work. ” As well he has published extensively in the Philosophy of Music Education Review, Interchange, The Journal of Educational Thought, Educational Leadership, The Canadian Journal of Education, and other venues.

When Pier Giorgio Di Cicco first appeared on the Canadian literary scene in the early 1980s, he was immediately recognized as one of the most compelling voices of his generation. The Last Effort of Dreams is the first critical collection on Pier Giorgio Di Cicco and traces the steps of his career from different perspectives. The contributors, fellow poets and academics alike, ponder Di Cicco’s poetry in diverse ways: through reminiscence, by taking stock, and by focusing on individual texts and specific themes. What emerges is an intriguing composite picture of Di Cicco’s complex and unique identikit. The volume includes both scholarly analysis and testimonials by individuals who lived the literary history of which Di Cicco is a part. The inclusion of a bibliography of Di Cicco’s publications and of those about him makes this book a valuable tool for anyone approaching his works for the first time and anyone interested in contemporary North American minority literatures or contemporary Canadian literature.

``Readers of The Last Effort of Dreams are treated to sophisticated and insightful interpretations of some of the author's major collections. ..including We Are the Light Turning (1975), The Tough Romance (1979), Flying Deeper into the Century (1982), and Virgin Science: Hunting Holistic Paradigms (1986), as well as his more recent works, Living in Paradise (2001), The Honeymoon Wilderness (2002), and Dark Time of Angels (2003). ... It is hoped that this fine publication will act as a catalyst for a broader scholarly interest in the work of an important voice in Canadian poetry. ''