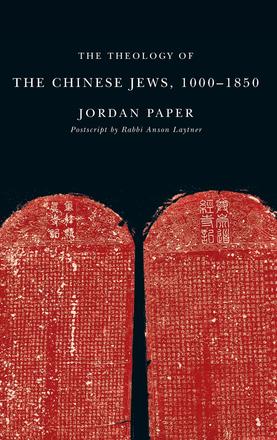 Table of Contents for
The Theology of the Chinese Jews, 1000–1850 by Jordan Paper

Who Are the Chinese Jews?

Are the Chinese Jews Jewish?

What Are the Sources for the Theology of the Chinese Jews?

Is This Theology Relevant Today?

Chapter 2: From Whence They Came to Where They Went

The Extent of the Diaspora

Jewish Life under Christianity and Islam: Tenth to Twelfth Centuries

The Sea Route to China and the Settlement in Kaifeng

Chapter 4: Brief History of Buddhism and the Abrahamic Traditions in China

The Buddhist Experience in China

Christianity to the Mid-Nineteenth Century

Christianity in China after the de Facto Demise of Judaism

Chapter 5: The Sinification of Judaism

Education and Its Relationship to Judaism

The Kaifeng Jews and Their Neighbours

Chapter 6: A Speculative Theology of the Chinese Jews

The Names of God: Hebrew

The Kaifeng Synagogue’s Stelae and Plaques

The Names of God: Chinese

The Nature of Creation

Monotheism from a Chinese Perspective

Postscript: What Western Jews Can Learn from the Kaifeng Jews | Rabbi Anson Laytner

Appendix: Chinese Logographs for Terms and Translations in Chapter 6

A thousand years ago, the Chinese government invited merchants from one of the Chinese port synagogue communities to the capital, Kaifeng. The merchants settled there and the community prospered. Over centuries, with government support, the Kaifeng Jews built and rebuilt their synagogue, which became perhaps the world’s largest. Some studied for the rabbinate; others prepared for civil service examinations, leading to a disproportionate number of Jewish government officials. While continuing orthodox Jewish practices they added rituals honouring their parents and the patriarchs, in keeping with Chinese custom. However, by the mid-eighteenth century—cut off from Judaism elsewhere for two centuries, their synagogue destroyed by a flood, their community impoverished and dispersed by a civil war that devastated Kaifeng—their Judaism became defunct.

The Theology of the Chinese Jews traces the history of Jews in China and explores how their theology’s focus on love, rather than on the fear of a non-anthropomorphic God, may speak to contemporary liberal Jews. Equally relevant to contemporary Jews is that the Chinese Jews remained fully Jewish while harmonizing with the family-centred religion of China. In an illuminating postscript, Rabbi Anson Laytner underscores the point that Jewish culture can thrive in an open society, “without hostility, by absorbing the best of the dominant culture and making it one’s own. ”

``This fascinating book offers a history of Chinese Jewry based on existing sources and articles, and places this in the context of a broad overview of Chinese religious life. It is a wonderful, somewhat popular, but also very sophisticated achievement. Paper helps one see the complex ways that religions emerge and attain stability, even within a mighty tradition like Judaism. ''

``In this fascinating work, Jordan Paper not only explores the intricacies of Chinese Jewish theology, but also the meaning of being a Jew. Long a student of comparative theology and the phenomenon of the Chinese Jews, Paper details the development of Chinese Jewish theology and considers how this theology was impacted by the surrounding culture. ... Paper comes to the conclusion that these were indeed Jews from whom western Jews can learn a great deal. ''