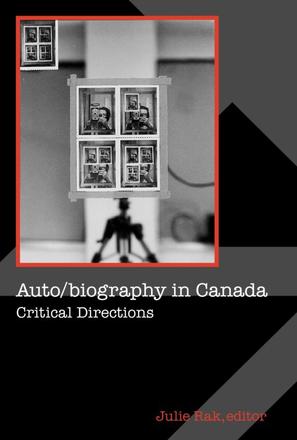 Table of Contents for
Auto/biography in Canada: Critical Directions, edited by Julie Rak

The Modern Hiawatha: Grey Owl’s Construction of His Aboriginal Self | Albert Braz

“This is my memory, a fact”: The Many Mediations of Mothertalk: Life Stories of Mary Kiyoshi Kiyooka | Sally Chivers

Auto/biographical Jurisdictions: Collaboration, Self-Representation, and the Law in Stolen Life: The Journey of a Cree Woman | Deena Rymhs

A Transfer Boy: About Himself | Ljiljana Vuletic and Michel Ferrari

(Un)tying the Knot of Patriarchy: Agency and Subjectivity in the Autobiographical Writings of France Théoret and Nelly Arcan | Barbara Havercroft

“The ensign of the mop and the dustbin”: The Maternal and the Material in Auobiographical Writings by Larua Goodman Salverson and Nellie McClung | Wendy Roy

Albert Braz is an assistant professor of comparative literature at the University of Alberta, specializing in Canadian literature in its inter-American contexts. He is the author of The False Traitor: Louis Reil in Canadian Culture (2003).

Sally Chivers is an assistant professor of Canadian studies and English at Trent University. She is the author of From Old Woman to Older Women: Contemporary Culture and Women’s Narrative (2003). Her current research interests include Canadian cultural depictions of aging and disability.

Susanna Egan teaches in the department of English at UBC, and has written on various aspects of autobiography. Her most recent book is Mirror Talk: Genres of Crisis in Contemporary Autobiography.

Ann Fudge Schormans is a doctoral candidate at the Faculty of Social Work, University of Toronto. Ann’s involvement with people with intellectual dis/Abilities spans her professional career as a social worker in both the Community Living and Child Welfare sectors, as well as foster and adoptive parents.

Barbara Havercroft, associate professor of French and Comparative Literature at the University of Toronto, has published extensivley on recent French, Québécois, and German autobiographical writings, on feminism and post-modernism, and on literary theory. The author of Oscillation and Subjectivity: Problems of Enunciation in the Novels of Robbe-Grillet, Sarraute, and Johnson (forthcoming, University of Toronto Press), she is completing a book on gender and genre in contemporary life writing.

Gabriele Helms tuaght in the Department of English at UBC until her death in December 2004. She has published on auto/biography and Canadian literature; she is the author of Challenging Canada: Dialogism and Narrative Techniques in Canadian Novels (2003). The essay collection Auto/biography in Canada: Critical Directions is dedicated to her memory.

Laurie McNeill is currently on a SSHRC post-doctorla fellowship at the University of Michigan. She has published on World War II civilian internment diaries from the South Pacific, and on web-diaries as life writing.

Julie Rak is an associate professor in the Department of English and Film Studies at the University of Alberta. Her recent publications include essays about auto/biography in Canadian and international journals and book collections, and the book Negotiated Memory: Doukhobor Autobiographical Discourse (University of British Columbia Press, 2004).

Deena Rymhs is an assistant professor of English at St. Francis Xavier University. She has just completed her dissertation on the experience of incarceration in First Nations writing. Her work has appeared in Canadian Literature, Essays on Canadian Writing, Genre, and Studies in American Indian Literature.

Wendy Roy is an assistant professor of English at the University of Saskatchewan. Her research is on Canadian women’s life writing, especially travel writing, and she has previously published articles on Margaret Laurence, Anna Jameson, and Carol Shields.

Si Transken has a doctorate in equity studies from the University of Toronto and is now completing an MA in First Nations studies and creative writing at UNBC. She also teaches at the University of Northern British COlumbia. Her courses include Women and Social Policy, Family Counseling, and Social Work with Victims of Abuse. She has had work published in books such as Feminist Utopias, Care and Consequence, Caring Communities, and Equity and Justice. Her poetry has been published in Canadian Women’s Studies, Azure, and Reflections on Water.

Ljiljana Vuletic is a doctoral candidate in applied cognitive science at the University of Toronto. For the past twenty years, she has been involved in working on assessment and interventions with children with autism. Her main research interests are cognitive development and early identification of children with autism.

Charting the Canadian development of life writing studies, these essays in Auto/biography in Canada: Critical Directions offer crucial new theoretical and critical perspectives. Julie Rak's introduction is a model of its genre, perceptively surveying the field to resituate existing criticism and persuasively theorize new directions. The contributors' methodological approaches serve as a highly productive paradigm for how to read certain auto/biographies. Engaging, lucid, and critically sophisticated, this book makes a significant contribution to the study of auto/biography.

These two volumes [Auto/biography in Canada: Critical Directions and Tracing the Autobiographical] from Wilfrid Laurier University Press introduce an exciting and substantial body of new work in autobiography studies. ... In Canada now, the leading scholarly researchers in this field are at work collaboratively, and they are both surveying and shaping a field that is increasingly diverse, cross-disciplinary, and in multimedia forms. ... Rak's . .. intention . .. is to exceed the boundaries of literary criticism.

Julie Rak evidently set herself the task of connecting with scholars in the social sciences who are using narrative research methods, and the result is the publication here of essays that have resounding implications for how we, in several intersecting fields, think about what constitutes a good life and what counts as competent communication to others about our lives. ...One can look [to Rak's introduction] for a systematic mapping of auto/biography studies as a scholarly field (historical and current) and for an explicit engagement with the overlap between autobiography studies and cultural studies as political projects. A model of clarity and comprehensiveness, this introduction will be a valuable starting point for advanced undergraduate and beginning graduate students, and an important sounding-board for the next wave of scholarship on auto/biography in Canada.

Other Books By Julie Rak 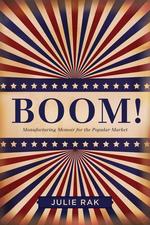