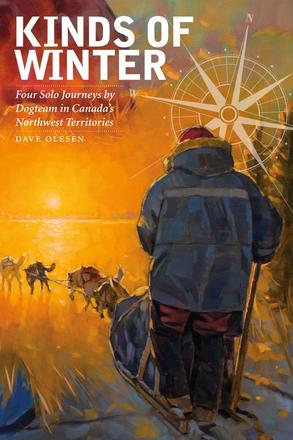 I was getting out there again. We had left the home watershed behind, and the familiar trails leading up it, and the little bastion of coziness at Maufelly Bay. From my journal:

“My world has narrowed to the contents of my sled, these ten dogs, my clothing and the things I always carry in my pockets—”matches, knife, pliers, cord . . . Strip all of it away and I would die almost instantly. The cold and the vastness together would do me in. My caches are miles apart. I creep carefully, cautiously, from one to the next. An odd sensation like vertigo sweeps over me at times, in my mind and the pit of my stomach, and I have to breathe deeply and muster my resolve. The feeling is similar to an unnerving sensation I sometimes conjure up when I am flying the Husky: suddenly I see myself all alone—”the plane and its engine have vanished. It is just me up there, strapped into my tiny chair, suspended a mile or more above the earth. ”

My lead dog Steve had been favouring his right wrist since our midday break just north of Fletcher. In camp that night I heated some Algavyl salve and rubbed it in, then wrapped his wrist and lower leg with a neoprene brace. The pungent smell of the liniment flooded my mind with memories of the Iditarod and the Yukon Quest races. I imagine it did the same for Steve, B. J. , and Murphy, who were the only race veterans in that team of ten dogs. Since we were not racing, I was free to treat Steve with aspirin, and I gave him a coated 325 milligram tablet. By the next morning he was still favouring the wrist slightly, but he was putting a little weight on it again.

Taken together, Steve’s bum wrist and the weather seemed to call for a rest day. It was day six of the trip and we were about a hundred miles out from home. In my journal I recorded the morning weather, and although it looked harmless enough when written down, there was something about it I did not trust: minus 20 degrees, very light snow, visibility four or five miles, the sky overcast at about 400 feet, and a light breeze from the east. I had no barometer, but I guessed that the pressure was rapidly falling. Something was going to happen.

The book will not be “it” anyway. “It” is the trips themselves, and my belief in the importance of them. “It” is Robert Lake, the Noman portage, 46 below at the Thelon cache, frozen dog dicks and frozen toes, the surprise of a mild February day way up on the Back River, our arrival at Moraine Point . . . “It” is the country deep down, felt and seen and slept with, mile by mile, by dogtrot and snowshoe step. The landscape is a part of me now in a way that it was not a part of me four years ago. “It” is that visceral connection, beyond the realm of language.

Lines of caribou trails in snow dropped down from the steep prow of Gibraltar Point; “More a place for mountain goats than caribou,” I remarked to the dogs. We had not crossed a caribou track since our passage down McLeod Bay on that first evening of the trip. By late afternoon we had picked up the traces of our outbound trail from that first night’s run. The dogs clearly knew we were coming into the home stretch. A few hundred yards ahead of the lead dogs a wolverine loped across the ice, making as close to a flat-out sprint for safety as a wolverine can muster. We were no threat to it, but Spruce was eager to veer off and give chase. The long patch of glare ice abeam Shelter Point was still polished smooth. Ernie, the only dog in the team who was wearing booties that day, started to slip and skid wildly. I stopped and took his booties off, giving him back the use of his toenails for traction. “Feet heal faster than shoulders,” as old Ray Gordon had once reminded me during a race.

That evening, rolling down the shore between Shelter Bay and Sentinel Point, the day’s mild air gradually cooled as the shadow of the high cliffs fell over us. With the dogs still moving gracefully, almost effortlessly, a light north breeze puffing up, caribou and wolf tracks here and there . . . I wanted it never to end. A voice in my mind asked,”Please can I just do this—”this right now—forever? And never have to submit an amendment to an airplane maintenance schedule or pay my bills or buy groceries or consider what I am going to do when I am old and can’t do this anymore? Can’t we just run and run and then, in one perfect moment, like Mallory on the shoulder of Everest, just vanish forever into this cold clean air?“ Long pause. “Nope. You can’t. You have to go in. Hell, let’s face it Olesen, you want to go in. “

Table of Contents for Kinds of Winter: Four Solo Journeys by Dogteam in Canada's Northwest Territories by Dave Olesen

Compass Points, Over the Boulders, Eager. ..

Appendix A: Food, Gear, and Some Notes on Winter Camping

Appendix B: The Dogs and Their Care

A veteran dog musher, Dave Olesen finished the Iditarod Trail Sled Dog Race eight times. After a fifteen-year career as a sled dog racer, Olesen set out to fulfill a lifelong dream. In four successive winters he steered his dogs and sled on long trips away from his remote Northwest Territories homestead, setting out in turn to the south, east, north, and west, and home again to Hoarfrost River.

His narrative ranges from the personal and poignant musings of a dogsled driver to loftier planes of introspection and contemplation. Olesen describes his journeys day by day, but this book is not merely an account of his travels. Neither is it yet another offering in the genre of “wide-eyed southerner meets the Arctic,” because Olesen is a firmly rooted northerner, having lived and travelled in the boreal outback for over thirty years. Olesen’s life story colours his writing: educated immigrant, husband and father, professional dog musher, working bush pilot, and denizen of log cabins far off the grid. He and his dogs feel at home in country lying miles back of beyond.

This book demolishes many of the clichés that imbue writings about bush life, the Far North, and dogsledding. It is a unique blend of armchair adventure, personal memoir, and thoughtful, down-to-earth reflection.

“Dave Olesen’s four midwinter dogsled journeys project struck me as a wonderfully sane choice of place- and self-exploration, reminding me of how Thoreau walked many days across thickets and swamps exploring his homeplace. But what a vast landscape Dave lives in! And what mindful and sympathetic attention it took to pack and plan for not just himself but a whole team of tough and dedicated dogs. I understand why he did it, but the details of how is an education in itself. The book’s back matter on winter camping, and on the care of dogs, alone is worth it. The relaxed but steady frame of mind in which he packed and travelled is the key. I salute this man and his passion, and his family for giving him space to explore it. An old Inupiaq Eskimo once said to me as I set out in a canoe on a September river, “Don’t have any adventures!”

“This is a wonderful book, telling the story of four incredible journeys by a remarkable man. ”

- Kathleen Coskran, author of The High Price of Everything

“A vivid ‘armchair traveler’ experience like no other, Kinds of Winter is highly recommended. ”

“Dave Olesen is a thoughtful, articulate adventurer who closely notes the details of an extraordinary existence in which the mundane chores of daily life entail severe consequences for inattention, keeps track of his experiences and observations in journals which he turns into books to share with fortunate readers. His latest book Kinds of Winter is, to sum up, beautiful. ... The adventure alone makes Kinds of Winter worth the read, but Olesen is no chest-thumping conqueror of the extreme compiling a resume of achievement for the reader to admire. Olesen, like his literary/spiritual predecessors Muir, Thoreau, Leopold, Abbey and Snyder is reminding himself and the reader of Muir’s admonition: ‘Keep close to Nature’s heart. ..and break clear away, once in awhile, and climb a mountain or spend a week in the woods. Wash your spirit clean’. .. We should all be happy for Dave Olesen who has the skills, discipline and insight to make every reader happy he and she took the time from the ticking clock to read Kinds of Winter. ”

“Working animals were once a staple of town and country life: pit ponies, sheep herders, warehouse mousers. All lesser mammals were bred for chores or meat. ‘The main thing to remember,’ says a friend who’s spent a lifetime with horses, ’is that they don’t care about your feelings. ’. .. ‘To watch huskies scrap with each other, or to watch dogs go after a teammate who has for some reason become a scapegoat, is sobering to anyone who tries to mold dogs to a human model or to elevate them to a preconceived notion of furry nobility,’ Olesen writes. ‘They are physical, and we must relate to them on that level. ’. .. Olesen’s book is a crisp account of a world now gone in urban Canada, when animals worked as hard as their owners. ”

“Kinds of Winter is a chronicle of the beauty, the lore, the why, and the dog sled adventure of travelling across the Barren Lands. It is written by a master of winter travel by dogteam. To anyone who loves the north or who has a curiosity about living in the cold this is a must-read. ” 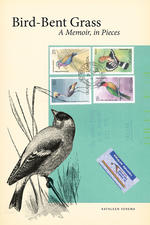 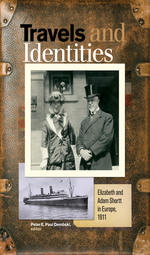