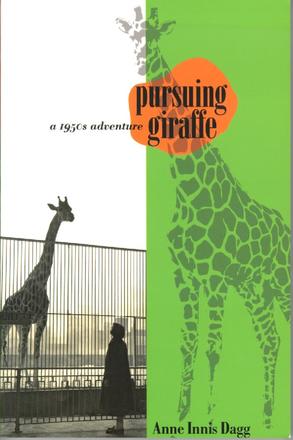 Now that I'm back at Fleur de Lys, I immediately begin again to observe and record what giraffe are up to. My main focus, however, becomes completing the giraffe film, and adding more sequences to the 16 mm colour footage that Mr. Matthew and I have already taken to make it into a complete documentary of the animals' behaviour. We have visions of showing it publicly in a bid to conserve land for wildlife in Africa, or of selling it to Walt Disney to make money to help wildlife. I already have good sequences of Star walking, Cream galloping, an extended close-up of Cream trying to wrap his long black tongue around a high leaf while feeding, sparring between Star and Lumpy and several other males, giraffe drinking at a waterhole and at a cattle trough, and Star chewing and swallowing his cud. Mr. Matthew, during my absence, has filmed splendid slow-motion shots of single and herds of giraffe running, and a scene of giraffe silhouetted against the setting sun.

New giraffe calves have been born at Fleur de Lys since I've been away, so I'm thrilled to be able to film a mother suckling her young. In fact, I'm so excited that my hands shake as I try to change the reel to take even more footage and I manage to jam it in the camera; I have to wait until I'm back at the farmhouse at night to fix the problem in my blacked-out bedroom. On the way home, annoyed at my stupidity with the camera, I drive carelessly over a sand ridge on the track, onto which Camelo becomes stuck. I have to walk four miles to the Fleur de Lys office to ask Mr. Matthew if he will allow some workers to drive back to Camelo and lift her clear. He agrees, but I feel badly to be so inept.

It's important to show that the development of land for farming in the eastern Transvaal has not destroyed the lifestyle of the giraffe, so I spend a day trying to film in slow motion a giraffe stepping over a four-foot wire fence--a sequence that will later prove invaluable for a scientific paper I'll publish called “The role of the neck in the movements of the giraffe”--because they swing their necks far back when lifting their forelegs and well forward again to lift up their hind legs and finish a jump. With the film rushing through the camera at four times its normal speed, it's distressing to have my target animal suddenly pause reflectively beside the fence instead of crossing it, perhaps even mesmerized by the noise of the camera. I finally have my shot, but at the expense of reams of useless footage.

“When the farm was first fenced years ago,” Mr. Matthew tells me,”the giraffe routinely walked through the fences and broke them. The damage was so great that the board of Fleur de Lys talked about shooting all of them. But then they somehow learned to go over instead of through the fences, and most of the damage suddenly stopped. “

An African is still employed to do nothing but mend the endless miles of fencing on the farm, but lapses on the part of the giraffe are rare. One giraffe became so fence-conscious that he walked up to a wire gate that was open without noticing that there was no wire there. He lifted first one foreleg and then the other high into the air, edged forward, then pulled his hind legs up and over after them. He walked calmly on, ignoring the shout of laughter behind him.

In the middle of the day when the light is too harsh for photography, especially when its very hot, I edit the acceptable short clips into our definitive film using Mr. Matthews film editor and glue. On the evenings when processed films and slides are returned to us by mail, Mr. Matthew, George, and I screen the former to see if they're good enough for the master reel. For newly developed slides, we set up the slide projector to examine and admire them. Once, to my horror, I realize that I've taken a photo of a male baboon sitting on a rock with his pink penis exposed, the full monty. I rush on to the next slide, worried that one of the men will say something, but they don't. I learn later that this posture in monkeys and apes has a name, a penile display, meant to intimidate other males and maintain dominance. I often think of it today when I see sitting men holding court with their legs spread apart, a posture uncommon for women. . . .

On the evenings when Mr. Matthew is away, I work on the cattle report Mr. Matthew has asked me to prepare, organizing the extensive notes I've made on what plants I've seen them browse, and how they divide their time between browsing and grazing. I also catch up with the newspapers he has saved for me in a large heap. I'm keeping a scrapbook of political clippings, reading each new development in apartheid with amazement:

· Now theres a new law that fines anyone who allows white nurses to accept orders from non-European nurses C$200, as if this is likely to ever happen, given the racial structure of the country.

· The Minister of Native Affairs announces that any native can be refused entrance to a church in a European area, which is most of the country and where one-third of Africans live. What sort of Christianity is this? Dutch Reformed Church, apparently.

· The English-speaking whites are worried about the Prime Ministers refusal to attend a meeting of the Commonwealth Council of Prime Ministers, as well they might be, seeing that the country will soon vote to become a republic.

Mr. Matthew has told me to my relief that since it is now April, the beginning of cold weather, snakes will be hibernating. This turns out not to be true, which is hardly surprising when the temperature still reaches 100 degrees Fahrenheit at midday. One Sunday, when Mr. Matthew and I are on foot hunting for giraffe to film, a cobra flushed by a moving herd of cattle comes through the grass toward us, with its head in the air and its yellow hood spread. Frozen in place with horror, I stand watching it approach, unable to move or even call out. Luckily, Mr. Matthew sees it and rescues me by grabbing a thick stick and quickly killing it.

A few days later, when I'm driving slowly near the shopkeepers house in Klaserie, a four-foot cobra streaks across the main road right under Camelo, spreading its hood before diving into the bush. For once, safely ensconced in my car, I'm not afraid of the creature.

Table of Contents for
Pursuing Giraffe: A 1950s Adventure by Anne Innis Dagg

6. Settling in at Fleur de Lys

In the 1950s, Anne Innis Dagg was a young zoologist with a lifelong love of giraffe and a dream to study them in Africa. Based on extensive journals and letters home, Pursuing Giraffe vividly chronicles the realization of that dream and the year that she spent studying and documenting giraffe behaviour. Dagg was one of the first zoologists to study wild animals in Africa (before Jane Goodall and Dian Fossey); her memoir captures her youthful enthusiasm for her journey, as well as her nÃ¤iveté about the complex social and political issues in Africa.

Once in the field, she recorded the complexities of giraffe social relationships but also learned about human relationships in the context of apartheid in South Africa and colonialism in Tanganyika (Tanzania) and Kenya. Hospitality and friendship were readily extended to her as a white woman, but she was shocked by the racism of the colonial whites in Africa. Reflecting the twenty-three-year-old author’s response to an “exotic” world far removed from the Toronto where she grew up, the book records her visits to Zanzibar and Victoria Falls and her climb of Mount Kilimanjaro. Pursuing Giraffe is a fascinating account that has much to say about the status of women in the mid-twentieth century. The book’s foreword by South African novelist Mark Behr (author of The Smell of Apples and Embrace) provides further context for and insights into Dagg’s narrative.

"Dagg . .. learned a great deal about giraffe . .. but those studies are among the least significant reasons for reading this wonderful memoir . .. Instead it should be read because it's an engaging, amusing, thoughtful, charming, honest, probing and eye-opening account of a young Canadian woman's encounters with racism, with sexism, with colonialism and with the animal kingdom in general and people in particular--especially men. ... Dagg is a natural story-teller. "

"This beautifully written book explores a young Canadian biologist's field studies on giraffes, and her impressions of Africa and its people in the mid-1950s. But her story is much more than just research into giraffe behaviour and life in Africa. Anne Innis Dagg is most concerned about what she learned, while in Africa, about herself. Pursuing Giraffe relates the tale, through stories of giraffes and the evolving situation within Africa, of a brave person's effort to live life honestly . .. travelling alone, pursuing zoological research at a time when work in the field was not only rare but also totally male-driven. ... One cannot forget when reading Pursuing Giraffe that its bones rest on a journal that had been kept over 1956 and 1957, and the immediacy of that journal is one of the book's most powerful attributes. "

"This book is. ..about one person's intellectual imagination, spirit of adventure, and daring: where she has long dreamed of going, where others either say she shouldn't or cannot go, and some work against her going, she goes. ...Anne Innis Dagg has written a brave and moving account of her time as a young white woman travelling and doing research in Southern and East Africa. "

- Mark Behr, author of The Smell of Apples and Embrace

Other Books By Anne Innis Dagg 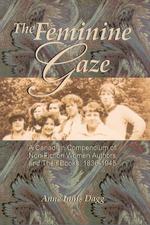