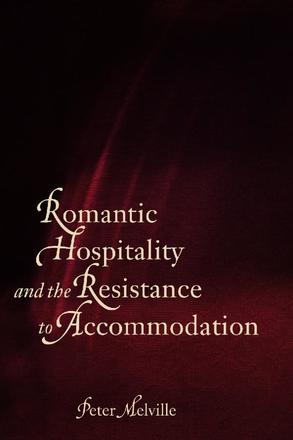 Romantic Hospitality and the Resistance to Accommodation

Introduction: Reading the Foreign: Romantic Hospitality and the Resistance to Accommodation

Of Mice and Women: A Preliminary Case Study for a Theory of Romantic Hospitality

The Impossibility of Hospitality and the Resistance to Accommodation

Chapter One: Unsettling Rousseau: Hospitality in Emile and Discourse on Inequality

The Sleepy Carib: Rousseau as Host

Chapter Two: The Rights of the Stranger: Kant’s “Bond of Hospitality”

Eating, Tasting, Hosting: Toward a Philosophy of the Dinner Table

The Politics of Eating (with) Others

Staging the Nation: Hospitable Performances in the Anthropology

International Hospitality and the Conditioning of a Perpetual Peace

On the Foreigner in Perpetual Peace

Chapter Three: Coleridge and the Poetics of Hospitable Failure

A Mouse in the House

Coleridge and the Fort-Da Game of Hospitality

The Case of “Christabel”

The Fluttering “Stranger” and the Failure of the Hospitable Imagination

Animal Hospitality and the “Lure” of Language

Plague as Metaphor and the History of Disease

“Visitations” of the Plague

Unspeakable Acts: Toward a Hospitality to Come

What does hospitality have to do with Romanticism? What are the conditions of a Romantic welcome? Romantic Hospitality and the Resistance to Accommodation traces the curious passage of strangers through representative texts of English Romanticism, while also considering some European philosophical “pre-texts” of this tradition. From Rousseau’s invocation of the cot-less Carib to Coleridge’s reception of his Porlockian caller, Romanticisms encounters with the “strange” remind us that the hospitable relation between subject and Other is invariably fraught with problems.

Drawing on recent theories of accommodation and estrangement, Peter Melville argues that the texts of Romantic hospitality (including those of Rousseau, Kant, Coleridge, and Mary Shelley) are often troubled by the subject’s failure to welcome the Other without also exposing the stranger to some form of hostility or violence. Far from convincing Romantic writers to abandon the figure of hospitality, this failure invites them instead to articulate and theorize a paradoxical imperative governing the subject’s encounters with strangers: if the obligation to welcome the Other is ultimately impossible to fulfill, then it is also impossible to ignore. This paradox is precisely what makes Romantic hospitality an act of responsibility.

Romantic Hospitality and the Resistance to Accommodation brings together the wide-ranging interests of hospitality theory, diet studies, and literary ethics within a single investigation of visitation and accommodation in the Romantic period. As re-visionary as it is interdisciplinary, the book demonstrates not only the extent to which we continue to be influenced by Romantic views of the stranger but also, more importantly, what Romanticism has to teach us about our own hospitable obligations within this heritage.

``Based on the Derridian assumption that hospitality always entails the risk of exposing both the guest and the host to `the constitutive violence of their relationship' [and] focusing on a fascinating choice of texts. ... Melville explores scenes of hospitality in Romantic writings in which the most characteristic effect is `disorientation' (320). Despite the need, even the obligation to welcome the other, the actual confrontation is inevitably discomforting. ... By problematizing such relationships, Romantic Hospitality and the Resistance to Accommodation focuses attention on an important and neglected area of Romantic studies. ''

``[A] sign of the book's success is the desire it instills in the reader to invite other texts and other thinkers to the table that Melville has set. There is a deep significance to the idea that there is a disproportion, internal to phenomenon, between manifestation and what appears in it and that there is necessarily, an excess or surplus to the phenomenon in the phenomenon, and in its self-relation. The foremost question is how to read this surplus--this `elsewhere' or beyond that paradoxically is so central to our sense of self. Ultimately, Melville is right in arguing that the manner in which we enter into relation with this surplus is intimately connected to how we read our relationship to the other. But he is also correct that precisely how the other should be read is a question that is impossible to answer just as it is impossible to ignore. ''

- Sean Dempsey, Romanticism and Victorianism on the Net, #53, February 2009

``Melville's analyses . .. are consistently subtle, nuanced and productive of a host of questions that continue to press in upon us for answers. His close readings, even where they deal with isolated or tangental scenes of hospitality . .. are compellingly rich and expansive. ''