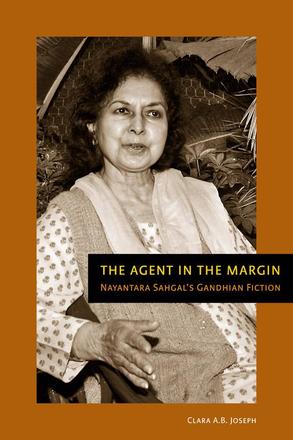 The Agent in the Margin

Excerpt from The Agent in the Margin: Nayantara Sahgal's Gandhian Fiction by Clara A. B. Joseph

From the Conclusion: Representing the Human Person

In her blatantly autobiographical novels, A Time to Be Happy (1958), This Time of Morning (1965), Storm in Chandigarh (1969), and The Day in Shadow (1971), Sahgal represents the virtuous wife or the virgin wife to establish the Gandhian link between virginity and violence, where such virginity is violent precisely because it is externally imposed. The Gandhian metanarrative of brahmacharya, with its suggestions of the rule of the self (swaraj) and, therefore, nonviolence, serves to set off the undesirability and horror of imposed virginity. Sahgal's virtuous wives, in various ways, opt for swaraj in the space between patriarchal oppression and the resultant pain. They engage their agency in this choice amidst pain. In Bearing Witness: Partition, Independence, End of the Raj, Sukeshi Kamra takes a step beyond Jean François Lyotard's insistence on the negative representability of pain. As if in response to Lyotard's injunction in The Differend: Phrases in Dispute of “silence imposed on knowledge” (56), Kamra warns, “Silence, however, is not an answer either” (304). Instead, she proposes literary praxis: “This art can do by turning away from the mimetic mode, from seeking to mirror the experience--which cannot in any case be mirrored--and into a mode of interaction with the text of the experience” (305). Kamra uses poststructuralist terminology--”the text of the experience”--to signify the intense trauma cases that she examines and illustrates as only the other side of the independence celebrations of India and Pakistan. Yet, her concept of “the mode of interaction” is indicative of the realistic agency to which she invites both the author and the reader and, by association, the literary work. Here, Kamra appears to agree with Said's view that “the purpose of the intellectual's activity is to advance human freedom and knowledge” (“Representation” 17). Sahgal's female character as virgin wife, in her option for swaraj, evolves as such an intellectual, the thinking and ethical subject who resists the patriarchal aspects of Gandhian ideology that forbids divorce or the brokenness of a family, and instead embraces that ideology through an emphasis on dialogic interaction, which, in the spirit of swaraj, respects the sanctity of the means (the dialogic means of listening, acknowledging, considering) to reach the goal of Nussbaum's good.

The notion of swaraj, with its claims to a foundation of universal truth and justice, like that of another Gandhian term--satyagraha, or truth-force--has required a close look at Althusser's notion of the subject as interpellated. The interpellated subject fits, in several ways, the structuralist, constructed subject or that which is always already the buyer of perspectives and values within an Ideological State Apparatus. Critics such as Nussbaum and Said have, and rightly so, defined such a subject as devoid of agency. However, Gandhian beliefs of swaraj and satyagraha assume a grounding in notions of universal truth and justice--a denial of constructivism in some matters--and, hence, would repeatedly be rejected by economic- or power-oriented ideological apparatuses. A Situation in New Delhi and Rich Like Us, for instance, project a nonpatriarchal world of justice in the vision of Sitarajya, or the rule of Sita, as opposed to the Ramrajya of traditional discourse. The possibility and vision of Sitarajya (a term coined by Gandhi) is founded on the insistence on the end of oppression and an unrelenting, self-giving search for truth. The seekers, whether male or female, Indian or otherwise, are satyagrahis; their strength is love. Gandhi defines this force early on in his career:

“The force implied in this may be described as love-force, soul-force, or, more popularly but less accurately, passive resistance. This force is indestructible. He who uses it perfectly understands his position. We have an ancient proverb which literally means: `One negative cures thirty-six diseases. ' The force of arms is powerless when matched against the force of love or the soul. “ (CWMG 10: 290)

Elsewhere he writes, “There are no limits on satyagraha, or rather, none except those placed by the satyagrahi's capacity for tapascharya, for voluntary suffering (CWMG 16: 7). Where such satyagraha is at once transcendent (soul-force) and sacrificially immanent (love-force), neither a feminist discourse that exclusively privileges women per se or a postcolonial discourse that is biased towards the colonized can tolerate the inherent message of satyagraha, of universal justice and truth. Where both feminist and postcolonial theories build on (post)structuralist paradigms, a hermeneutics of suspicion sets in to reject what are called “metanarratives” of essentialism and universalism. Such a hermeneutics, as Bernard Williams notes in Truth and Truthfulness: An Essay in Geneology, paradoxically seeks truthfulness in its “reflex against deceptiveness” (n. p. ) even as it adamantly denies the existence of truth. A patriarchal and imperialist position that is also sufficiently poststructuralist, as in the insistence on the celebration of difference rather than respect for common humanness, too would brand universal justice and truth as uselessly overarching. Not surprisingly, Ashis Nandy notes the intensity of threat that satyagrahis posed for imperialists. Poststructuralist rejection of the notion of universal truth and justice is also in keeping with the conception of the non-agential, (relatively) constructed subject. However, Althusser opposes the classic structuralist notion of a homogeneous structure of ideology and instead proposes an understanding of a multifarious system, the apparatuses of which are varied. He introduces the term “overdetermination” into Marxist analysis to dismiss the notion of ideology as “false consciousness”, as well as to affirm the potential of the overdetermined nature of ideology to interpellate a subject that is unpredictably resistant and an agent. Althusser's notion of overdetermination helps to theorize the resistance of the subject who turns inward to control the self, the attempter of swaraj and the establisher of social and national independence, or swarajya. A truth-seeker, or satyagrahi, is such an agent.

Table of Contents for
The Agent in the Margin: Nayantara Sahgal's Gandhian Fiction by Clara A. B. Joseph

Chapter One: The Interpellated “I”: Gandhian Ideology and the Autobiographical Genre

The Agent in the Margin: Nayantara Sahgal’s Gandhian Fiction is a comprehensive study of the literary works of Nayantara Sahgal, daughter of Vijaya Lakshmi Pandit—the first woman president of the United Nations General Assembly—and niece of Jawaharlal Nehru, India’s first prime minister. Clara A. B. Joseph introduces Mahatma Gandhi’s political and philosophical to literary analysis and utilizes non-structuralist aspects of Louis Althusser’s theories of ideology to trace how characters marginalized by gender, class, race, and language in Sahgal’s work assume agency, challenging poststructuralist theories of cultural and ideological determinism. She considers how gender complicates autobiography and how the roles of daughter, virgin, wife, widow, and alien serve (often ironically) to highlight human dignity.

"How lucky we are to have this book, which captures the unusual place of Nayantara Sahgal's committed writing in contemporary Indian literature. Best known as Jawaharlal Nehru's niece and a severe critic of her cousin Indira Gandhi, Sahgal appears in Joseph's vividly concise analysis as a strong writer mapping agency for Indian collective identity. Grounding her approach in an acute summation of the entire arc of her subjects life-thought, Clara Joseph balances brilliantly her literary criticism of Sahgal's work with philosophical elements that make her book an interesting theoretical piece thoroughly woven with rigor and deep sensitivity. As such, postcolonial and Gandhian scholars are offered here the opportunity to consider the interaction between Gandhian ideology and Sahgal's fiction in the context of the making of post-independence India. "

- Ramin Jahanbegloo, University of Toronto, author of India Revisited (2007)and The Spirit of India (2008)

"As I read Clara Joseph's The Agent in the Margin: Nayantara Sahgal's Gandhian Fiction, I was brought back to [my] first meeting with Sahgal and our wide-ranging conversation about her life, Indian politics, and literature. Since that time, I have read a great deal of scholarly commentary on Sahgal's writing, and Joseph's book stands out as the most serious and sustained examination of the literary, cultural, and political significance of Sahgal's work to date. ... It is [a] careful reading of Sahgals' work in dialogue with the influence of Gandhi's writing and Indian culture and history that is perhaps the most original and insightful aspect of Joseph's book. ... This is an essential book for any scholar interested in making sense of this important literary figure in contemporary Indian literature. "