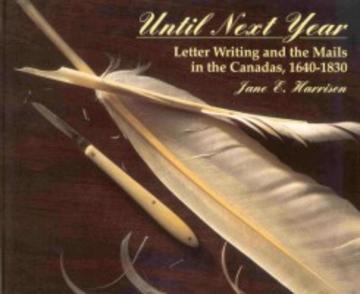 Quickly, easily, by e-mail, fax and phone — in a variety of ways — we communicate with distant friends, family and associates, and we think nothing of it.

Canadians in the past knew a very different world. Over long distances, in all sorts of weather and amidst the dangers of war, pirates and myriad other hazards, the growing colony of Canada was entirely dependent upon letters to communicate news, commerce, loneliness or desire. To carry each letter to its destination, correspondents had to rely on ad hoc, unofficial and occasional opportunities, as well as upon the efforts of friends, travelers and members of the society at large. Letters were precious possessions, their arrival anxiously anticipated, often for months.

Until Next Year recreates this exciting and engaging world, when writing a letter was considered an art and when creating paper itself took the patience and skill of a seasoned artisan. Using the private letters of Canadians and their correspondents, Harrison details how letters were written, how they were delivered, who wrote them and why. Beyond the letters themselves, this story is amply enriched with an abundance of maps, photographs and prints.

"Here is a lovely look at what was involved in writing letters 200 years ago. ...The many fine old prints and the specially created modern maps enhance the text and make this a volume to treasure. "

"Until Next Year is a celebration of the art of letter writing in the Canadas. ...Here are charming examples of private correspondence, made all the more delightful by the accompanying maps and diagrams, the photographs of actual letters, the pictures of old writing instruments, and the reproductions of historic sketches and paintings. In our era of e-mail and faxes, this is a book for anyone who cherishes the humanity of the handwritten word. "

"These two books offer welcome new perspectives on the evolution of letter writing in France and its North American colony of New France between the sixteenth and nineteenth centuries. ..Beautifully illustrated with extant letters and writing implements, the book focuses on the physical conveyance of letters in New France and Canada between the seventeenth and nineteenth centuries. ...The strength of Jane Harrison's book is to capture the pastness of the past, as it reconstructs an era when letter writing seemed as technically intricate and socially restrictive as computer use is in the present day. "

"Without fear and with a manly heart"