Poet and scholar, E.D. Blodgett has published seventeen books of poetry two of which were awarded the Governor General’s Award. He is an Emeritus Professor of Comparative Literature at the University of Alberta. His research has varied from mediaeval European romance to Canadian Comparative Literature and his publications include Five-Part Invention: A History of Literary History in Canada (2003) and Elegy (2005). 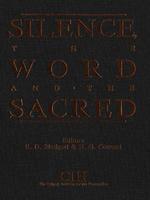 Silence, the Word and the Sacred