Michelle Fowler completed her MA at Wilfrid Laurier University in 2005 with a research focus on the Presbyterian Church in Canada during the Great War. An article based on her MA thesis, “‘Death Is Not the Worst Thing’: The Presbyterian Press in Canada 1913—1919”, was published in War and Society. She has also published articles in Canadian Military History. Michelle Fowler was the research coordinator at the Laurier Centre for Military Strategic and Disarmament Studies from 2004—2007 and remains a research associate of the centre. Her current focus is on the role of civil affairs officers in 21 Army Group during the liberation of Northwest Europe, 1944—45. 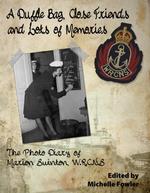 A Duffle Bag, Close Friends and Lots of Memories