Barry M. Gough is a Canadian maritime and naval historian. He has written more than a dozen books, working to recast and reaffirm the imperial foundations of Canadian history. He was educated at the University of British Columbia, the University of Montana, and King’s College London. He taught from 1972 to 2004 at Wilfrid Laurier University. He was also the founding director of Canadian Studies and on retirement was appointed University Professor Emeritus. 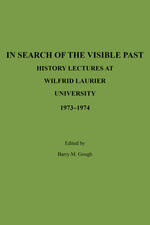 In Search of the Visible Past