Jay Hodgson is an associate professor of popular music at Western University, where he teaches courses in songwriting and project paradigm record production. He has provided music for movies featured in Rolling Stone and SPIN magazines, for documentaries produced by the United Nations, and for companies such as the YMCA. He has produced, mixed, and mastered more than 500 tracks recently for record labels as far afield as Sierra Leone, Ibiza, Berlin, New York City, and Montreal. His book Understanding Records was recently acquired by the Rock and Roll Hall of Fame Reading Room. 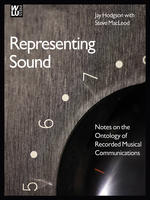