Roderick McGillis is a professor of English at the University of Calgary. He is the author of the award-winning The Nimble Reader (1996), A Little Princess: Gender and Empire (1996), and Les Pieds Devant (2007), and the editor of George MacDonald: Literary Heritage and Heirs (2007). He is a former editor of The Children’s Literature Association Quarterly, and former president of the Children’s Literature Association. 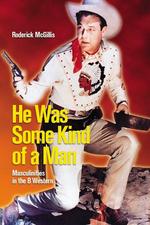 He Was Some Kind of a Man