Kenneth D. McRae, Professor of Political Science, Carleton University, Ottawa, is a Past President of the Canadian Political Science Association and a Fellow of the Royal Society of Canada; he served as a research supervisor for the Canadian Royal Commission on Bilingualism and Biculturalism. His publications include Switzerland: Example of Cultural Coexistence; The Federal Capital: Governmental Institutions; Consociational Democracy; an edition of Jean Bodin’s The Six Bookes of a Commonweale; and Conflict and Compromise in Multilingual Societies, Vol. 1, Switzerland (WLU Press, 1983). 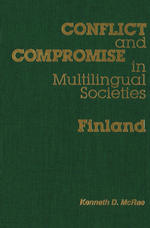