A lifelong pioneer, Margaret Norquay has always been involved in community development, first with Farm Radio Forum and then with the Canadian army, where she served as a welfare officer. Postwar, in Dunnville, she was the first woman in Ontario to be appointed a community recreation director. Her marriage took her to Mayerthorpe, Alberta, as a minister’s wife and community volunteer. Later she wrote documentaries for CBC’s Take Thirty and became the director of studies for Open College, Ryerson. 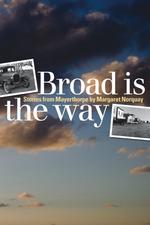 Broad Is the Way