Renate Pratt’s commitment to the abolition of apartheid began during her years in Tanzania, at that time home to many exiled members of southern Africa’s liberation movements. Later, she co–authored Investment in Oppression (1973), the first enquiry into the implications of Canadian investments in South Africa. Pratt has received an honorary doctorate of laws degree from McMaster University. 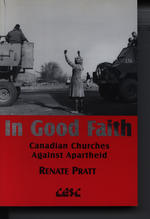