Imre Rochlitz (1925–2012) was born in Budapest but spent his childhood in Vienna, where he lived until 1938. After surviving the war years in Yugoslavia, he emigrated to the United States and earned a law degree at New York University. He moved back to Europe in 1958. Encouraged by his family, he made a return trip to Yugoslavia in 1981,

which sparked the writing of these memoirs. 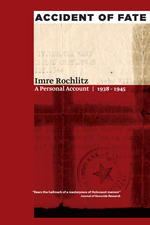