David Rome was a Canadian historian and the director of the Montreal Jewish Public Library and was part of the Canadian Jewish Congress as the archivist and later historian of the organization. He was officially honoured on several occasions, recieving CJC’s H.M. Caiserman Award and being invested as a Knight in the Order of Quebec in 1987. In addition, he is also the co#8211;author of Les Juifs du Québec, bibliographie r#233;trospective annot#233;e (1979) and The Stones that Speak/Les pierres qui parlents (1992). 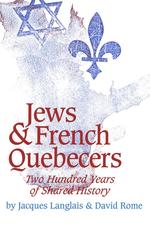