Born in 1899 in Quebec City, Francis Reginald (Frank) Scott was a public poet, an accomplished editor and mentor of a generation of writers, an influential professor of constitutional law, and a founding member of the Co-operative Commonwealth Federation (CCF). Emerging as one of the “Montreal Group” of modernist poets of the 1920s, Scott spent the next five decades writing poetry and working to transform both Canadian poetics and politics. With a penchant for satire, Scott’s work is sometimes playful and witty and sometimes gravely concerned with the legacies of political ineptitude and the fragility of both humanity and the environment. 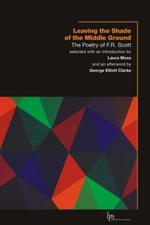 Leaving the Shade of the Middle Ground