Tom Sharp is the younger of the two boys who came to live with the Williamsons in Canada. He had a civil service career in trade policy and was awarded the Commander of the British Empire (CBE) in 1987. He was an elected local councillor in Guildford, Surrey, a governor of two local schools, and a citizens' advice bureau member. 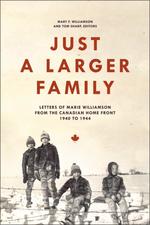