Michael Snow was born in Toronto in 1929. His works are included in the collections of the National Gallery of Canada; the Museum of Modern Art, New York; and the Musée d’art moderne, Paris. His films have been shown at the Toronto, Berlin, Pesaro and Cannes festivals. As a musician he has played many concerts and festivals (e.g., Musica Nova, Hamburg, New Music America, the Olympic Arts Festival, Du Maurier Jazz Festival, etc.) and has produced recordings as well as the sound tracks for his films and gallery sound installations. He has received several awards, including a Guggenheim Fellowship and the Order of Canada. 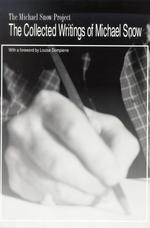 The Collected Writings of Michael Snow