Andrew Thomson arrived at Wilfrid Laurier University in the fall of 1976 as an impressionable young high school graduate and left four years later as a Bachelor of the Arts. In the following years he added an M.A. from Laurier and earned a Ph.D. at the University of Waterloo. After teaching his first course in Canadian History at Laurier in 1989, he has been employed there regularly as a contract academic. Thomson is an enthusiastic and popular instructor with the Laurier Association for Lifelong Learning. In 2011 he was nominated for a Teaching Excellence Award at the Schulich School of Business at York University. 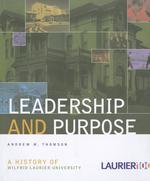