Our history is our own cautionary tale. But we need to develop a critical consciousness of a different sort.

Some five years ago I began a book project centred on a number of European intellectuals in the year 1930. I realized that major thinkers, including Thomas Mann, Virginia Woolf, José Ortega y Gasset, Bertolt Brecht, Paulette Nardal, and Aldous Huxley, in and around the year 1930, all sought to grapple with a number of major issues still central to our lives. They were joined by a number of artists, including René Magritte and George Grosz, and musicians, such as Kurt Weill.

Some were friends, others were hardly known to the rest. However, 1930 saw a coming together of major intellectuals of Europe about European values and stability, and the future of the continent. What makes 1930 such a watershed, I realized, is that rarely have so many important minds, independently, worked on such similar issues at the same moment. The book is titled 1930: Europe in the Shadow of the Beast. 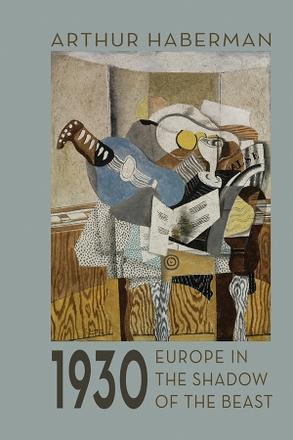 There was fear on the part of these major figures, and worry about the future. They were Cassandra-like in warning about where the West was headed. In retrospect, the year 1930 can be seen as the dawn of a period of darkness, the beginning of what W. H. Auden would in 1939 style "a low, dishonest decade." It was one of the most deeply reflective moments in the history of the West. Western civilization stumbled into a war without precedent in 1914, managed to survive its conflagration, but did not immediately create something viable and valuable afterward. Intellectuals asked, Where are we heading? Who are we, and how do we build moral social and political structures? Can we continue to believe in the insights and healing quality of our culture? Big questions. After the optimism of the nineteenth century, Europe questioned itself and its own viability.

Today, at a time marked by the reappearance of strongmen at the helm of major Western states, the challenge to democracy and its processes, the anger against immigrants and refugees, and the appeal to nationalism and national self-interest, many are making reference to our experiencing once again a time like 1930.

"Globalisation and its advocates are on the back foot,” Tony Blair said recently. “Once it is clear that populism isn’t working because, ultimately, it offers only expressions of anger and not effective answers, the populists may double down, alleging that failure is the result of half-heartedness and that only more of the same will work. Who knows where the dynamic of that scenario takes us. Then the comparisons with the 1930s no longer seem far-fetched."

A June 22, 2018, column in The Guardian by Jonathan Freedland was titled "Inspired by Trump, the world could be heading back to the 1930s."

There are many similarities in the concerns of public intellectuals in 1930 and 2018. Among them are:

1) The viability of a secular West with Enlightenment values

Many then and now are worried about the rise of a strident and ethnic nationalism that demonizes others. The values we inherited from the Enlightenment, especially those surrounding universal human rights, are today being questioned, as they were in 1930. Perhaps those values apply to "us" and not "them." Perhaps those values mean nothing in an era of Putin, Erdoğan, Orbán, and Trump.

2) The rise of the politics of irrationality

The old Liberal view was one that gave humans the right to decide their own path in life based upon self-interest and rational choices. Then as now, some were asking if we make political and social decisions based on irrational desires and unconscious choices. How, then, do we develop a body politic that makes us responsible for our choices? Is there a danger to mass society that was not foreseen?

3) Mass culture and its dangers

"The characteristic of the hour," wrote Ortega in 1930, "is that the commonplace mind, knowing itself to be commonplace, has the assurance to proclaim the rights of the commonplace and to impose them wherever it will." Does the victory of liberal democracy mean that those who benefit from it will destroy the very society that raised them up? It was certainly possible in 1930, and it remains possible today, that democracy will be destroyed from within, by people assenting to being governed by dictatorial leaders who will destroy the democratic institutions, especially an independent judiciary, they vowed to protect.

4) Identity and the Other in the midst of Western civilization

There were various Others in the West in 1930, including women, Blacks, and Jews. We know what happened in that decade. Freud said in May 1933, in response to the public burning of books in Germany, "What progress we are making. In the Middle Ages they would have burnt me; nowadays they are content with burning my books." As we know, they were not content at all. Where will states like Russia, Hungary, Poland, Turkey, and the United States stop? Will they stop?

There were other Others in certain states: enemies of the state, they were called, from farmers in Ukraine to Roma in Europe. Today, many are being demonized: journalists who fight for a free press, judges who behave independently, the poor who are not grateful to the rich. And some are being dehumanized, including migrants, immigrants, refugees, and those seen as a danger to ethnic purity. They are called "invaders," sometimes being referred to as a kind of disease being brought into a country. The language of racism is now again at the core of public anger.

5) The new Fascism: is it a new norm or an aberration?

In 1930 the coming to power of Nazism in Germany was three years away. But Fascism was on the march, most prominently in Italy, where the party was in power, but elsewhere as well. Poland established a military dictatorship in 1926 and Yugoslavia ended parliamentary democracy in 1929. Hungary had right-wing parties. Austria had its authoritarian right-wing politicians, and in Germany the Nazi party was gaining support. Fascist groups existed in France from the mid-1920s. Fascism would continue its growth after 1930 in many other countries, including Spain, Belgium, the Netherlands, Greece, and Romania. People in Britain and the United States were sympathetic.

Today, it is hard to use the word Fascism because it is used so regularly—even Fascists call others “Fascists” as an insult—it has lost some of its power. That should not happen. It is clear that such states as Turkey, Hungary, and Poland have been moving toward Fascism. Indeed, Hungary and Turkey could properly be said to be there. Russia is a kleptocracy but it is also a Fascist state. China is ruled by a Communist Party that behaves fascistically. The United States, in the attacks on a free press, the politicizing of the judiciary, the attempts on the part of the administration to abandon due process, the systemic racism of many of its laws, including those relating to voting, and the gap between rich and poor, can easily be understood as institutionalizing something we can call “soft Fascism.” Perhaps it will go further.

6) The dystopian trend of thought

Very few utopias have been written in the West after 1914. Rather, in place of the reforming utopia as the good place, the dystopia, the cautionary tale of where we already might be and where we are going, has gained legitimacy. Zamiatin’s We, the book that Orwell used as the model for 1984, was completed in 1921, though not published in the Soviet Union until 1988. It warned of the perils of totalitarianism. Huxley’s Brave New World, the third of this trio of great dystopias, was written in 1931.

Today, dystopia is a popular genre, especially given our fear of where we are headed. Earlier we had a series of nuclear dystopias. The end of the world dystopia is still with us, in the form of technology, accident, and of course the environmental dystopia. Utopia happened a long time ago, in Eden or in the early age of gold described by Greeks and Romans. We regularly see ourselves on the downslope of history.

The 1930s were a failure. They witnessed extraordinary violence and killing. They culminated in the Second World War. We now fear the future in a manner similar to those reflecting on where the West was at the opening of that decade.

There is no question that the 1930 public intellectuals still have much to offer. Their works are among those that we must return to every so often to learn how we came to be who we are and to find instruction.

Today we in the West look back on our history from 1914 and see an abundance of dystopian events and examples. We see the warnings of our 1930 public intellectuals and the years they lived through, witnessing their sad prophecies become realized even more horrifically than they imagined. We in the West must pay attention, because the works of the public intellectuals of 1930 and those years from 1930 to 1945 can profoundly inform the present day. Our history is our own cautionary tale.

However, while the 1930 artists and writers provide guidance, especially in their questions and concerns, we now must think about the categories of thought and kinds of analyses that are appropriate to our own times. The intellectuals discussed in my book are part of the Modernist movement that contributed much to the interwar years and beyond. Now, in our postmodern world, where culture exists in ways very different from 1930, we need to develop a critical consciousness of a different sort. Without question, we can borrow from the past. Not to do so leaves a vacuum unfilled. But the worlds of Plato, Cicero, Aquinas, Michelangelo, Newton, and others, including Mann, Woolf, Ortega, Huxley, and Freud, are no longer what the West happens to be. 1930 offers great insight into our times, but it cannot fully supply the template of understanding. That is our task.