– So, Managing Editor, what’s on your bookshelf?

– Of course. What else do you have there?

– What else? Well, page proofs of books in production, though not nearly as many as in years past, when one could make photocopies without a crippling sense of guilt. And Press publications of recent vintage. Outdated Press catalogues. Back issues of The Times Literary Supplement. Catalogues from the AAUP’s Book, Jacket & Journal shows —

– Back to the core question, please.

– During a job interview for this very position, the incumbent asked me about the reference works I was using in my then current job. The question struck me as delightful. A chance to talk shop!

– The question helped you, I take it.

– It says something about an editor’s experience, his professional perspective, his ease in the environment, if he can speak familiarly on the tools of the trade that matter most.

– And what are the tools you refer to, if I may try again to point you in the better direction?

– First is the book that matters so much that it’s not on my shelf at all but on my desk, open all day under the warming light of my desk lamp. It’s the Canadian Oxford Dictionary, 2nd edition, from 2004. That’s the Press spelling authority. Three hundred thousand words. The COD 2/e is a sturdy 1800-page hardcover, but on my copy heavy use has left its marks. The dust jacket fell to pieces and was discarded long ago and the tight blue vinyl wrap on the boards is scuffed, scored, and encrusted. The corners have been bumped so often that the vinyl has worn away to expose the grey cardboard underneath, and this, as it emerges, expands into the light like a pustule. More unsightly still is the ten-inch strip of duct tape I applied to reinforce the loose front hinge.

I’ve used that dictionary almost daily for over twelve years and have so far found only two or three typos, which I’ve highlighted in yellow. Those are the only marks I’ve made in the book. Editors are born to find fault and bring it to light. 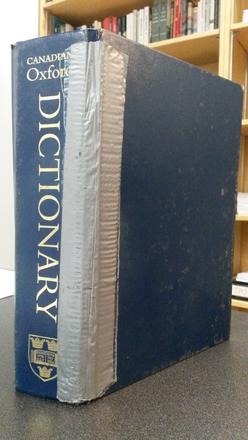 – You look up words every day?

– Yes. Like many bookish people, I’m not a great speller. Moreover, no two dictionaries are alike, and all contain what appear to be inconsistencies. Although our COD 2/e spells “acknowledgement” with an “e” before the “ment,” it does not do the same with “judgment.” It shows “modelled” with the double consonant but “benefited” with the single. It hyphenates “pre-flight” but not “preliterate.” It divides the terms “world view” and “under way,” contrary to the usual practice. It italicizes “pied-à-terre” but not “mise en scène.” And, in the oddest entry I’ve found to date, it italicizes “pièces de résistance” (plural) but not “pièce de résistance” (singular).

– “Pièce de résistance” is common currency in English, but its plural form is not.

– Perhaps. But I still feel that lexicographers move in mysterious ways.

– So it may seem, if you’re not of their tribe.

– That’s it exactly. So I trust that they have their reasons and have reams of data on trends and occurrence ratios to back up their decisions as well as an editorial style that meshes, more or less, with those decisions. Because I hold that view, all spellings in the Press house style are contained between the covers of a single dictionary, which means I don’t need to give to the Press’s copy editors a supplementary list of exceptions. I wouldn’t want to ask copy editors to look up words twice and I wouldn’t want to do that myself.

– You’re implying that the COD 2/e contains a few spellings that some editors might want to overrule on their exceptions lists.

– Sure. Many editors would prefer “acknowledgement” without the middle “e.” Most would prefer “postcolonial” to the hyphenated version in the COD. Many would spell “Internet” with a lower-case “i,” and, for that matter, many would add “lowercase” in adjectival form, since that doesn’t appear in the dictionary at all. But don’t get me wrong. I’m full of admiration for the book. For one thing, it’s typographically beautiful. It embodies that Canadian talent for splitting the difference between US and UK proclivities, and it’s well larded with Canadianisms (“poutine,” “Molson muscle,” etc.). But it’s not strong on syllabication. It’s showing its age. It lacks a few commonplace technological terms.

– You can find them here, to the COD’s credit. Sadly, the exigencies of contemporary publishing have made that dictionary an unlikely candidate for updating anytime soon.

– The Compact Oxford English Dictionary, 2nd edition, the one-volume shelf-breaker with the magnifying glass. I consult it only occasionally, for words not in the COD, for etymological information, and to see certain words or phrases in the context of a sentence. I have two or three other English dictionaries as well, gathering dust, and a thesaurus. Also a Larousse French–English dictionary, minus its covers, that was published early in the de Gaulle presidency.

– What about non-dictionary reference works?

– Of those, the one I turn to most often is the Chicago Manual of Style, 17th edition, from 2017. Many Press publications make use of one of the two documentation styles outlined in that book. And its eleven-page hyphenation table is invaluable. Knowing when to hyphenate a compound and when to leave it open is a mark of a good editor. A good editor perceives the gulf that separates “best known writer” from “best-known writer.” Chicago contains an enormous amount of information in its 1150 pages. I may never need to know about the use of the hamza in transliterated Arabic, or the standard abbreviation for hyperbolic tangent, but I’m glad to know that such information is there, just in case.

– Which documentation styles are used in Press books apart from Chicago style?

– MLA style and APA style are used as well, in the humanities and the social sciences, respectively, so I have copies of their most recent handbooks. The eighth edition of the MLA Handbook has been around for a couple of years and in some ways it is radically unlike its predecessor. It’s taking some getting used to. I haven’t noticed authors rushing to embrace it.

– WLU Press publishes many books in series. Are any of your reference works series specific?

– Gregory Younging’s Elements of Indigenous Style is a recent (2018) publication that will undoubtedly influence the editing of manuscript in our Indigenous Studies series. But its advice reaches deep into other humanities disciplines and into legal and scientific ones as well, not to mention copyright specifically. Every Canadian editor should have a copy and know what’s in it.

– A few usage guides in addition to Chicago. Editing Canadian English is good on citing legal documents in this country, and its section on the SI (metric) measuring system is thorough. The Guide to Canadian English Usage, by Margery Fee and Janice McAlpine, is useful in distinguishing between terms that are often used interchangeably – “masterful” and “masterly,” for example, and “impeccable” and “immaculate.” As you leaf through that book, you begin to appreciate the perhaps facetious claim that there are only two true synonyms in the entire English language: “gorse” and “furze.”

Also on the shelf are copies of Fowler’s Modern English Usage in its bossy second edition and its wishy-washy third. Fittingly, the former is a hardcover, the latter a paperback. There are a couple of books on non-sexist writing and a couple on Canadian copyright law – a perennial bottled-lightning topic. There’s a manual on word division in French. And finally the excellent Words into Type, which is an ancient (3rd edition, 1974) cult favourite among editors of a certain age. Every few years the community lights up with rumours of a new edition. It’s as though a favourite band from one’s past were about to regroup and take to the road.