Ask an Editor: What are the Types of Editors at University Presses? Part Two: Managing Editors

The terms I’ve most often heard people use to characterize the role of managing editor, which is the position I hold at WLU Press, are these:

It’s a two-sector job, though, so none of those terms suffices on its own. The first two speak only to the project-management part of the job and the third only to the editorial. But if you put the first or the second together with the third, you end with a fair likeness – as well as a construct that reflects some of the awkwardness built into the job.

Slashes have no agreed-upon meaning that I can discern. My fear is that readers will suppose “serious/violent” means (1) serious OR violent, (2) serious AND violent, or (3) both of the preceding. Is the equivocation intended?

The Press has up to twenty book projects moving through production at once, each at a different stage of ripeness. Each project has different team members. Among them are author (or volume editor and chapter contributors), freelance copy editor, freelance designer, freelance typesetter, and freelance indexer. In addition are at least four Press stakeholders, who may with good reason, in midstream, shorten a schedule, tweak the wording of a book title, or request that a volume be reset at a different font size. The managing editor coordinates the input of these people with the aim of keeping budgets and deadlines in hand and centrifugal force in check.

The third-level subheading needs to be redesigned so it is more easily distinguishable from the second-level. Perhaps run it in with the text that follows, put a period at the end, and insert an em-space after that.

Each project has its own personality. Each project more or less stubbornly resists our best effort to convert raw manuscript into saleable book. Editorial complications may proliferate, and often do.

In your proofreading report is a puzzling correction offered by the author of chapter 4. The copy editor had pointed out that the superscript note indicator 61 (in a passage on Godard) seemed to have its corresponding text in endnote 60 (on Langlois). The author’s solution was to insert a new endnote 60, which had the effect of making the old note 60 into note 61, old 61 into 62, and so on. The problem is that he did no updating to the corresponding indicators, so there are 71 of those, as before, but 72 endnotes.

Every day I contend with many moving parts, whether I’m checking page proofs or a proposed interior design or, on a larger scale, tracking the progress of each title as it is pushed, often in pieces, from one stage in the schedule to the next.

The author has completed her proofreading, so I attach three PDFs with scans of the pages she has identified for correction. My markup appears in red. I’ve also attached five Word files, which you can use as patches to be copied and pasted into the page layout. Once you’ve finished this pass, your revised pages go to the indexer, so please repair any orphans and widows you encounter at this stage.

It behooves me to be explicit and detailed in the instructions I offer on how to navigate any given stage of production. The occasional admonition on my part is unavoidable.

Please do not be tempted to edit an electronic copy of your original manuscript with reference to the copy editor’s suggestions and then submit the revision in lieu of a review of the edit itself. We will not accept the revised work but will proceed instead with the copy-edited version.

On a related note, I’d be remiss if I didn’t mention that it’s preferable by far to make emendations to the text now, during your review of the copy-editing, than later on, at proofreading, when revisions are more expensive to implement.

I like to think that most authors appreciate the guidance and feel that the work is in good hands and taking shape as it should. Occasionally, though, there comes the sound of bristling under the onslaught. “I’ve always had a built-in resistance to following instructions,” one author wrote in response to suggestions I had on reviewing a copy editor’s work, “and I read with mounting disbelief some of the directives in your very long note. Did you have toileting issues as a child? I am much inclined to do the opposite of what you ask.”

The author in this case completed his review in the prescribed form, however, and on we moved from copy-editing to page formatting, from proofreading to revised pages, and then to indexing, just as we do in cases where the author lacks built-in resistance.

Given the uncertainty we’ve experienced over the diacritics with the Indigenous words, I’d suggest that someone at your end review chapters 4 and 9 once more to make sure they appear as they should.

After eight or nine months of pushing, massaging, and cajoling, a title is deemed printer-ready. The many moving parts cease their grinding and scraping and for a while I breathe easier. Then, a month later, the printer ships the printed and bound work. 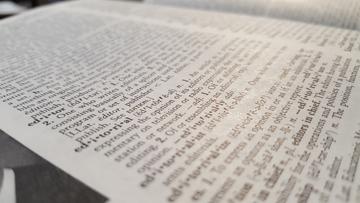 Fresh from the bindery a book arrives at the office on a winter’s day and I hold it in my hands for the first time. The outdoors chill clings for a moment to the cover lamination. I heft the volume’s weight and turn it this way and that to see it in the round. The cover design, until now nothing but a print on a sheet of paper or an image on a screen, is now the face of a real book. I am seeing the design with different eyes. Even the size of the book is never quite as I imagined it would be. That disconnect – between the book as it appeared in proof and the book as printed volume – is strangely disconcerting. But usually the newer impression is positive, emphatically so. The colours are stronger, the design bolder, the impact greater. At the printing plant, where many things can go wrong, everything this time went right.

With a hardcover book I listen for the faint crackle in the binding as I open the cover for the first time. But fear – editorial fear, one has to call it – prevents me from spending more than a few seconds riffling the pages. I’ll check to see that all pages are printed and all images tolerably crisp. But the pages in this final state, committed and now beyond correcting, are largely my responsibility, and it’s only too easy to find fault with them.

This is a very humbling line of work.

Read part one of this series, Acquiring Editors.