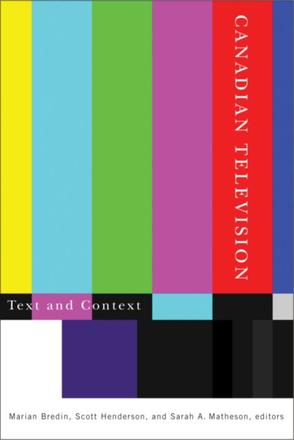 Table of Contents for
Canadian Television: Text and Context, edited by Marian Bredin, Scott Henderson, and Sarah A. Matheson

Foreword: One Thing about Television and Ten Things about Canadian TV | John Doyle (The Globe and Mail)

Part I: Television Studies in the Canadian Context: Challenges and New Directions

1. From Kine to Hi-Def: A Personal View of Television Studies in Canada | Mary Jane Miller

2. (Who Knows?) What Remains to Be Seen: Archives, Access, and Other Practical Problems for the Study of Canadian “National” Television | Jennifer VanderBurgh

7. How Even American Reality TV Can Perform a Public Service on Canadian Television | Derek S. Foster

8. Television, Nation, and Situation Comedy in Canada: Cultural Diversity and Little Mosque on the Prairie | Sarah A. Matheson

Kyle Asquith is a lecturer and PhD candidate in the Media Studies program at the University of Western Ontario. His research and teaching interests broadly encompass the complementary fields of advertising and consumer culture, media history, and the political economy of communication.

Marian Bredin is Associate Professor in the Department of Communication, Popular Culture and Film, and former director of the Centre for Canadian Studies at Brock University. Along with her participation in the Popular Culture Niagara Research Group, her main research interests include Aboriginal media, communications policy, and Canadian television. Most recently she co-edited Indigenous Screen Cultures in Canada for the University of Manitoba Press in 2010.

Michele Byers is Associate Professor in the Department of Sociology and Criminology at Saint Mary’s University. She is editor or co-editor of four books on television, and her work on television text, identity, and the archive has appeared in a broad range of journals and edited collections. She has held several SSHRC grants for the study of Canadian television, the most recent of which focuses on Canadian television and ethnicity.

Liz Czach is Assistant Professor in the Department of English and Film Studies at the University of Alberta. Her research interests include home movies, film festivals, and Canadian film. Her articles and reviews have appeared in numerous journals including The Moving Image, Cinema Journal, and Journal of Canadian Studies. She has contributed to the books La Casa Abierta: El cine domestico y sus reciclajes contemporaneos (2010) and Challenge for Change: Activist Documentary at the National Film Board of Canada (2010). She was a film programmer at the Toronto International Film Festival from 1995 to 2005 and currently organizes Edmonton’s Home Movie Day.

John Doyle has been television critic at The Globe and Mail since 2000 and was the critic for Broadcast Week, the Globe’s television magazine, from 1995 to 2000. His book A Great Feast of Light: Growing Up Irish in the Television Age was published to acclaim in Canada, the United States, Britain, Ireland, and Australia in 2005. His second book, The World Is a Ball: The Joy, Madness and Meaning of Soccer (2010), was also a national bestseller in Canada and has been published in the United States, Britain, Ireland, and Croatia.

Derek S. Foster is an Associate Professor in the Department of Communication, Popular Culture and Film at Brock University. His research consistently focuses on visual rhetoric in the public sphere and “mining the gap” between mass communication and speech communication. To this end, he has written numerous publications studying discourses of reality television and the rhetoric surrounding other forms of visual and material culture. His current research combines these foci in examining television-based memorials and commemorative exercises.

Scott Henderson is an Associate Professor in the Department of Communication, Popular Culture and Film at Brock University. He received his MA and PhD in Film Studies from the University of East Anglia. His research focuses on issues of identity and representation in popular culture. He has published on diverse subject matter, including YouTube and youth identity, gay and lesbian film, British cinema, Canadian cinema and popular culture, and Canadian radio policy.

Sarah A. Matheson is Associate Professor in the Department of Communication, Popular Culture and Film and the M. A. in Popular Culture at Brock University. Her main areas of research and teaching are film and popular culture with a special focus on Canadian television studies. Her recent work has appeared in the Canadian Journal of Film Studies and Film and History and in the anthologies Programming Reality: Perspectives on English-Canadian Television and The Tube Has Spoken: Reality TV and History.

Jennifer VanderBurgh is Assistant Professor (Film and Media Studies) in the Department of English at Saint Mary’s University in Nova Scotia. Her writing on a diverse range of texts—from Videodrome to Don Messer’s Jubilee—has appeared in various journals and edited collections. She is currently writing a book on archives and footprints of television in Toronto and recently coedited an issue of PUBLIC: Art/Culture/Ideas on Screens.

Canadian Television: Text and Context explores the creation and circulation of entertainment television in Canada from the interdisciplinary perspective of television studies. Each chapter connects arguments about particular texts of Canadian television to critical analysis of the wider cultural, social, and economic contexts in which they are created. The book surveys the commercial and technological imperatives of the Canadian television industry, the shifting role of the CBC as Canada’s public broadcaster, the dynamics of Canada’s multicultural and multiracial audiences, and the function of television’s “star system. ” Foreword by The Globe and Mail’s television critic, John Doyle.

“While the digital age transforms all media and globalization erodes national boundaries, television and its domestic contexts are still perceived as serving some form of national interest. Canadian Television: Text and Context celebrates English-Canadian television within this nexus of concerns, asking how our TV texts and the issues they raise provide Canadians with a ‘collective working through’ of our shared realities. Crossing disciplines and genres in rich explorations of forms and practices, this impressive collection signals loud and clear the depth and diversity with which Canadian television studies has arrived. ”

- Christine Ramsay, University of Regina, editor of Making It Like a Man: Canadian Masculinities in Practice (WLU Press, 2011) 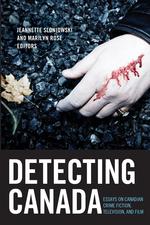