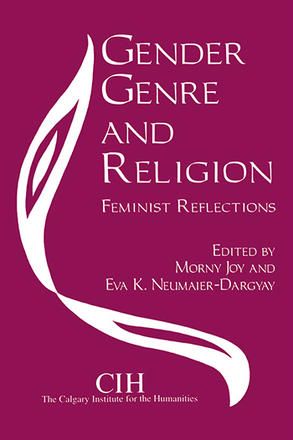 Chapter 14. A Religious Philosophy of Self | Winnie Tomm

Chapter 16. And What if Truth Were a Woman? | Morny Joy

Norma Baumel Joseph is a member of the faculty in the Department of Religion at Concordia University, Montreal. For the past eighteen years she has been teaching, lecturing and publishing on women and Judaism, Jewish law and ethics and women and religion. She has lobbied for Jewish women’s rights in a variety of contexts, forming local and international groups to further those goals. Norma appeared in and was consultant to the film Half the Kingdom. “Mostly, I love teaching, especially teaching women. There is so much on our agenda, we have so much to do; but first we must learn, reflect and study. And then we must share, empower and act. ”

Fan Pen Chen was born in Taiwan. She grew up in Taiwan, Libya and the US. She received her BA from Yale University and completed her MA, MPhil and PhD in Chinese literature at Columbia University. Having taught at the University of Calgary and the University of Alberta, Fan is currently an Assistant Professor at the Department of East Asian Studies at SUNY-Albany. Her numerous articles in both English and Chinese deal with the treatment of female personae in a wide range of genres of Chinese literature from the eighth to the nineteenth centuries.

Pamela Dickey Young is Associate Professor of Theology and Religious Studies and Dean of Women at Queen’s University. She is the author of Feminist Theology/Christian Theology (Fortress, 1990) and of many scholarly articles. In 1991–92 she was the President of the Canadian Theological Society. Her current research interests include feminism and religious pluralism and feminist christology. Among recent articles she has published are: “Diversity in Feminist Christology,” Studies in Religion/ Sciences Religieuses, 21/1 (1992): 81-90; “Theology and Commitment,” Toronto Journal of Theology, 9, 2 (Fall 1993): 169-176; “Ubi Christus Ibi Ecclesia: Some Christological Themes Relevant in Formulating New Ecclesiologies,” in New Wine: The Challenge of the Emerging Ecclesiologies to Church Renewal, ed. H. S. Wilson and Nyambura Njoroge (Geneva: World Alliance of Reformed Churches, 1994), 63-74; Christ in a Post-Christian World: How Can We Believe in Jesus Christ When Those Around Us Believe Differently Or Not At All? (Minneapolis: Fortress, Spring 1995); “Beyond Moral Influence to an Atoning Life,” Theology Today (forthcoming).

Monique Dumais teaches in Theology and in Ethics at the Université du Québec a Rimouski. After studies in Rimouski, her birthplace, she attended Harvard Divinity School and Union Theological Seminary in New York City, where she obtained a PhD in Theology in 1977. Her research is mainly focused on Women and Religion, Women and the Church in Quebec and also on Ethics in Feminist discourses. In 1976, she founded, with three other women, a Christian feminist collective in Quebec called L’autreparole. She has published many articles and books on her topics of research with Editions Paulines: Les femmes dans la Bible (1985); Experiences et Interpellations (1985); Souffles de femmes (1989); and with Marie-Andree Roy, Lectures feministes de la religion (1989) and Les droits des femmes (1992).

Mary Gerhart is Professor of Religious Studies at Hobart and William Smith Colleges. The author of The Question of Belief in Literary Criticism: An Introduction to the Hermeneutical Theory of Paul Ricoeur (1979), she has co-authored Metaphoric Process: The Creation of Scientific and Religious Understanding (with A. M. Russell, 1984) and co-edited Morphologies of Faith (with Anthony C. Yu, 1992). Her most recent book is Genre Choices: Gender Questions (University of Oklahoma, 1992), a study of the reciprocal ways in which genre and gender shape each other. She has served as editorial chair of Religious Studies Review and is on the editorial boards of several other journals.

Naomi R. Goldenberg is Professor of Psychology of Religion and former director of Women’s Studies at the University of Ottawa. She attended Princeton University and the C. G. Jung Institute in Zurich, and received her doctorate in Religious Studies from Yale University. She is the author of Resurrecting the Body: Feminism, Religion and Psychoanalysis (New York: Crossroad, 1993); The End of God: Important Directions for a Feminist Critique of Religion in the Work of Sigmund Freud and Carl Jung (Ottawa: University of Ottawa Press, 1982); and Changing of the Gods: Feminism and the End of Traditional Religions (Boston: Beacon Press, 1979).

Marsha Hewitt is Associate Professor of Social Ethics and Contemporary Theology at Trinity College and teaches in The Centre for the Study of Religion, University of Toronto. Her publications include From Theology to Social Theory: Juan Luis Segundo and the Theology of Liberation (Peter Lang, 1990) and Toward a Feminist Critical Theory of Religion (Fortress Press, 1995). She is editor of the series, Feminist Critical Studies in Religion and Culture (Peter Lang). Her recent articles include: “Cyborgs, Drag Queens and Goddesses” and “Illusions of Freedom: Some Regressive Implications of Postmodernism. ”

Morny Joy is Associate Professor of Religious Studies at the University of Calgary. She received her PhD in Philosophy of Religion from McGill University. Her recent publications include “Divine Reservations,” in Derrida and Negative Theology (SUNY, 1992) and “Feminism and the Self,” Theory and Psychology 3/3 (1993), and “God and Gender: Some Reflections on Women’s Explorations of the Divine,” in Religion and Gender (Blackwells, 1994). Moray is currently President of the Canadian Society for the Study of Religion.

Marilyn J. Legge is McDougald Professor of Systematic Theology at St. Andrew’s College, Saskatoon. Her publications include The Grace of Difference: A Canadian Feminist Theological Ethic (Atlanta: Scholars Press, 1992) and “Liberation Ecclesiology: The Church in Solidarity,” in Cadorette et al. , Liberation Theology: An Introductory Reader (Maryknoll, NY: Orbis Books, 1992). Her commitment to healing and justice is expressed through a diversity of networks, friendships and feminist activities.

Francine Michaud is Assistant Professor in the History Department, University of Calgary. She studied at the Université d’Aix-Marseilles and the Centre of Medieval Studies in Toronto, before obtaining her PhD from Laval University. Her area of interest is social and religious history in the High Middle Ages. Her dissertation on wills in Marseilles at the end of the thirteenth century has been published by the Pontifical Institute of Medieval Studies, Toronto, in 1994.

Sheila McDonough was born in Calgary, and received her doctorate from the Institute of Islamic Studies in McGill University. She taught for three years in the Kinnaird College for Women in Lahore, Pakistan, and for one year in the Selly Oak Colleges in Birmingham, England. Since graduating, she has been teaching World Religions, Islam, and Women and Religion among other subjects at Concordia University, Montreal. She was one of the professors who introduced Women’s Studies into the curriculum at Concordia in the early seventies. She is the author of Muslim Ethics and Modernity (Waterloo, ON: Wilfrid Laurier University Press, 1984) and Gandhi’s Response to Islam (New Delhi: D. K. Printworld, 1994).

Eva Neumaier-Dargyay is Professor and Acting Chair of Comparative Studies in Literature, Film, and Religion at the University of Alberta. She received her Dr. phil. and Dr. phil. habil. from the Ludwig-Maximilians University at Munich, Germany (1966 and 1976) in the area of Tibetan and Indian Languages and Literatures. Her research comprises the study and interpretation of Tibetan texts from a feminist and psychoanalytic perspective, and historical, anthropological and sociological studies of Tibetan civilization. She has published four single-authored books and one co-authored book on various subjects of Tibetan religion and culture besides many articles in scholarly journals.

Eileen Schuller did her studies at the University of Alberta, the University of Toronto and Harvard University where she obtained a PhD in 1984 in Near Eastern Languages and Civilizations. She has taught in Edmonton, Atlantic School of Theology in Halifax and presently is Associate Professor of Religious Studies at McMaster University, Hamilton. Her publications include books on Non-Canonical Psalms from Qumran: A Pseudepigraphic Collection (Scholars Press, 1986) and Post-Exilic Prophecy (Michael Glazier Press, 1988) and articles on “Women in the Apocrypha,” in C. Newsom and S. Ringe, eds. , The Women’s Bible Commentary (Westminster/John Knox Press, 1991) and “Women of the Bible in Biblical Retellings of the Second Temple Period,” in P. Day, ed. , Gender and Difference (Fortress Press, 1989). She is editing a number of hymnic and psalmic manuscripts from the Dead Sea Scrolls for Discoveries in the Judaean Desert, and has been Associate Editor of the Apocryphra section for the Harper Collins Study Bible.

Doreen Spence, who is a Cree from Northern Alberta, has been in the nursing profession for the past 35 years. She dedicates the majority of her time to performing volunteer work in the Native and non-Native communities, her emphasis always being on Aboriginal Issues and concerns. Doreen’s work in the field of human rights and the protection of fundamental freedoms for her people is unsurpassed in terms of historical and social content, clarity and effectiveness of presentation and in-depth knowledge of various indigenous cultures. She is the President of the Plains Indians Cultural Survival School Society, a position which she has held for over a decade. Doreen was nominated for the Woman of Distinction Award in 1989 and 1993, as well as for the Lamp of Learning Award through the Calgary Board of Education in May of 1993. She received an international award at the New Zealand Spiritual Elders Conference in 1992 along with the Dalai Lama, and also received the Chief David Crowchild Award in 1992.

Winnie Tomm is Associate Professor and Coordinator of the Women’s Studies Program at the University of Alberta. Currently she is completing the revisions on a manuscript on spirituality and feminism, supported by a SSHRC grant. She edited The Effect of Feminist Approaches to Research Methodologies (Waterloo, ON: Wilfrid Laurier University Press, 1989), and co-edited, with Gordon Hamilton, Gender Bias and Scholarship: The Pervasive Prejudice (Waterloo, ON: Wilfrid Laurier University Press, 1988) supported by the Calgary Institute for the Humanities. She has published articles and chapters on feminist spirituality, ethics and epistemology.

Katherine K. Young publishes in the field of Hinduism, especially South Indian Hinduism and Gender and Hinduism as well as comparative studies in Gender and Religion. She has recently edited a book entitled Hermeneutical Paths to the Sacred Worlds of India (1994) and is currently finishing two books: Spiritualty Walking a Hindu Way and New Perspectives on Women in Hinduism. She has written the theoretical introductions for three books: Women in World Religions, Religion and Women, and Today’s Woman in World Religions edited by Arvind Sharma. As well she coedits with Sharma the Annual Review of Women in World Religions.

Many feminists today are challenging the outmoded aspects of both the conventions and the study of religion in radical ways. Canadian feminists are no exception.

Gender, Genre and Religion is the outcome of a research network of leading women scholars organized to survey the contribution of Canadian women working in the field of religious studies and, further, to “plot the path forward. ” This collection of their essays covers most of the major religious traditions and offers exciting suggestions as to how religious traditions will change as women take on more central roles.

Feminist theories have been used by all contributors as a springboard to show that the assumptions of unified monolithic religions and their respective canons is a fabrication created by a scholarship based on male privilege. Using gender and genre as analytical tools, the essays reflect a diversity of approaches and open up new ways of reading sacred texts. Superb essays by Pamela Dickey Young, Winnie Tomm, Morny Joy and Marsha Hewitt, among others, honour the first generation of feminist theologians and situate the current generation, showing how they have learned from and gone beyond their predecessors.

The sensitive and original essays in Gender, Genre and Religion will be of interest to feminist scholars and to anyone teaching women and religion courses.

"These essays clearly illustrate the diversity not only within religious studies but within feminist studies in Canada. The book exemplifies the conviction of the editors that different methods and genres need to be employed in response to changing dimensions of the problem of gender in religion. The book provides a rich resource for all students of religion. "