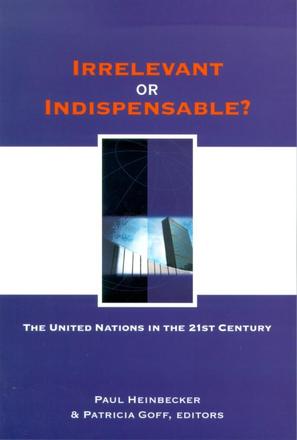 The United Nations in the Twenty-first Century

Table of Contents for
Irrelevant or Indispensable? The United Nations in the Twenty-first Century edited by Paul Heinbecker and Patricia Goff

From Ideas to Action

2. The United Nations: Adapting to the Twenty-first Century | Louise Fréchette

3. The Millennium Project: From Words to Action | Jeffrey Sachs

8. WMD and Terrorism: Can the UN Help to Keep the Genie in the Bottle? | Jayantha Dhanapala

9. Legal and Legitimate Use of Force under the UN Charter: A Critical Analysis of the Report of the High-level Panel | Tom Farer

Lloyd Axworthy is the President of the University of Winnipeg and a Special Envoy of the United Nations Secretary General to facilitate a peaceful resolution to the dispute between Ethiopia and Eritrea. Mr. Axworthy has been Minister of Foreign Affairs of Canada and a Member of Canadian Parliament. He has also served as Minister of Employment and Immigration and Minister of Transport. He has won the CARE International Humanitarian Award and was nominated for the Nobel Peace Prize for his work in the campaign for the elimination of anti-personnel landmines.

Nitin Desai is Honorary Professor at the Indian Council for Research in International Economic Relations, New Delhi, India, and Visiting Fellow at the Centre for the Study of Global Governance at the London School of Economics and Political Science, London, UK. Formerly, he held the position of Under-Secretary General for Economic and Social Affairs at the UN.

Tom Farer is the Dean of the Graduate School of International Studies at the University of Denver. He is also the former President of the Inter-American Commission on Human Rights of the Organization of American States and of the University of New Mexico. He is an Honorary Professor of Peking University and permanent Guest Professor of People’s University and Director of the Center for China-United States Cooperation. He has served as special assistant first to the General Counsel of the Department of Defense and then to the Assistant Secretary of State for Inter-American Affairs.

Shepard Forman is Director of the Center on International Cooperation at New York University. Prior to founding the Center, he directed the Human Rights and Governance and International Affairs programs at the Ford Foundation. He has served on the faculty at Indiana University, the University of Chicago and the University of Michigan; conducted field research in Brazil and East Timor; and authored two books on Brazil and numerous articles, including papers on humanitarian assistance and post-conflict reconstruction assistance.

Patricia Goff is Assistant Professor of Political Science at Wilfrid Laurier University and Special Research Fellow at the Centre for International Governance Innovation. She is co-editor with Kevin C. Dunn of Identity and Global Politics (Palgrave, 2004).

Lord David Hannay is a member of the House of Lords. He sat on the United Nations High-level Panel on Threats, Challenges and Change. He served as Permanent Representative of the United Kingdom to the United Nations and United Kingdom Special Envoy to Cyprus. He has served as Minister at the British Embassy in Washington, Ambassador and Permanent Representative to the European Community (EC), Chef de Cabinet for Sir Christopher Soames (Vice-President of the Commission of the EC), Assistant Under-Secretary of State (European Community) at the Foreign Office, and first secretary of the UK negotiating team for entry into the EC.

Paul Heinbecker is Distinguished Research Fellow at the Centre for International Governance Innovation and Director of the Laurier Centre for Global Relations, Governance and Policy. He was Canada’s Ambassador to the UN (2000–2003), where he supported the creation of the International Criminal Court and advocated for compromise on Iraq. Previous positions include chief foreign policy advisor to Canadian Prime Minister Mulroney, Ambassador to Germany, and Minister in Washington.

Bruce Jones is Deputy to the Special Advisor on Follow-up on the UN High-level Panel on Threats, Challenges and Change. In 2004, he served as Deputy Research Director for the High-level Panel on Threats, Challenges and Change, in addition to being Deputy Director for the Center on International Cooperation at New York University. He was previously Chief of staff in the UN’s political mission in the Middle East, and held other UN assignments in Kosovo and New York. He has written extensively on peacekeeping and post-conflict operations.

John W. McArthur is the Manager of the UN Millennium Project and Associate Director of the Earth Institute at Columbia University. With Jeffrey Sachs, he led the production of the UN Millennium Project’s final report, Investing in Development: A Practical Plan to Achieve the Millennium Development Goals, which was co-authored by the Project’s Task Force Coordinators and members of the secretariat. He is co-editor, with Michael Porter, Jeffrey D. Sachs, Peter Cornelius and Klaus Schwab, of the Global Competitiveness Report 2001–2002.

Jean Ping is the President of the fifty-ninth session of the United Nations General Assembly. Mr. Ping has held a variety of appointments at the ministerial level, including Ministre d’État, Minister for Foreign Affairs, Cooperation and la Francophonie, Minister of Mines, Energy and Water Resources and deputy minister in the Ministry of Finance, Economy, Budget and Privatization, and Minister of Planning, Environment and Tourism. He has received numerous honours, both at home and abroad. He is a member of the French National Association of Doctors of Economics (ANDESE), he holds a doctorate in economics from the University of Paris I (Panthéon-Sorbonne), and he has received honorary doctorates from the Institute of Diplomacy of China and the Institute of African Studies of the Russian Academy of Sciences in Moscow.

Kenneth Roth is the Executive Director of Human Rights Watch, a post he has held since 1993. The largest US-based international human rights organization, Human Rights Watch investigates, reports on, and seeks to curb human rights abuses in some 70 countries. From 1987 to 1993, Mr. Roth served as deputy director of the organization. Previously, he was a federal prosecutor for the US Attorney’s Office for the Southern District of New York and the Iran-Contra investigation in Washington.

Jeffrey Sachs is the Director of The Earth Institute, Quetelet Professor of Sustainable Development, and Professor of Health Policy and Management at Columbia University. He is Director of the UN Millennium Project and Special Advisor to United Nations Secretary General Kofi Annan on the Millennium Development Goals. Sachs is internationally renowned for advising governments in Latin America, Eastern Europe, the former Soviet Union, Asia and Africa on economic reforms and for his work with international agencies to promote poverty reduction, disease control, and debt reduction of poor countries. He was recently named among the 100 most influential leaders in the world by Time Magazine.

Ramesh Thakur is the Senior Vice Rector of the United Nations University (UNU) and Assistant Secretary General of the United Nations. He was Professor of International Relations and Director of Asian Studies at the University of Otago in New Zealand and Professor and Head of the Peace Research Centre at the Australian National University in Canberra before joining UNU in 1998. He was a Commissioner on the International Commission on Intervention and State Sovereignty which published the report The Responsibility to Protect, and Senior Advisor on Reforms and Principal Writer of the UN Secretary General’s second reform report.

Suffering from a divided membership, the United Nations is at a crossroads, unable to assure human or national security. The UN has been criticized as irrelevant by its most—and least—powerful members alike because it can’t reach consensus on how to respond to twenty-first-century challenges of global terrorism, endemic poverty, and crimes against humanity.

Secretary General Kofi Annan has proposed a package of sweeping reforms that would safeguard the rule of law, outlaw terrorism, protect the innocent from abusive governments, reduce poverty by half, safeguard human rights, and enlarge the Security Council. Intended to reinvigorate the institution and galvanize its members into action, his proposals are extensive and innovative, courageous and controversial.

This volume assembles the perspectives of current practitioners, leading academics, civil society representatives, and UN officials on transforming the secretary general’s proposed reforms into action. Their assessments are frank and their views varied, but they do agree on one thing—the United Nations must be made more effective precisely because it is indispensable to the promotion of economic development and collective security in the twenty-first century.

``The substantive content of the April 2005 Waterloo conference presented in this volume is unusually rich, reflecting the variety and quality of participants. The discussion was singularly pertinent to the debate over UN reform in 2005. ''

``UN reform is in the air, but is it feasible? This is essential reading to find out where we are and why change is desperately needed but desperately problematic as well. ''

``The volume has great virtues: immediacy, a sense of the ebb and flow of argument on UN reform among key actors involved, and crisp oral interventions transcribed (that by Lord David Hannay on the high-level panel is a masterpiece of the crisp cadences of imperial condescension--and also, as it happens, of wisdom). Heinbecker succeeded in attracting to Waterloo the most influential UN actors on reform issues and then worked them very hard. ''

``The hard-headed analysis in this book charts a path to a world that is more free, more secure, and more equitable. All we need now is the political will to make it happen. ''

``A special look from serious practitioners, academic experts, and senior diplomats at what it will mean to `reform' the UN and at some of the most critical factors that must be dealt with if the organization is to serve humanity as its founders envisaged. What you should know about the coming efforts to reinvent the United Nations. ''