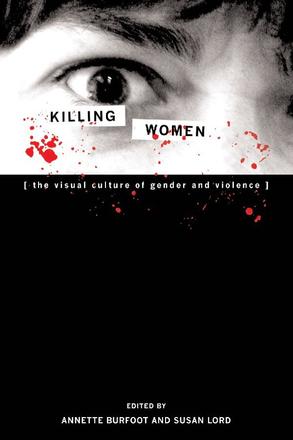 The Visual Culture of Gender and Violence

Table of Contents for
Killing Women: The Visual Culture of Gender and Violence, edited by Annette Burfoot and Susan Lord

1. Mapping Scripts and Narratives of Women Who Kill Their Husbands in Canada, 1866–1954: Inscribing the Everyday | Sylvie Frigon

2. Neither Forgotten Nor Fully Remembered: Tracing an Ambivalent Public Memory on the Tenth Anniversary of the Montreal Massacre | Sharon Rosenberg

4. Killing the Killers: Women on Death Row in the United States | Kathleen O’Shea

5. “Dealing with the Devil”: Karla Homolka and the Absence of Feminist Criticism | Belinda Morrissey

6. Pearls and Gore: The Spectacle of Woman in Life and Death| Annette Burfoot

7. “I Am Awake in the Place Where Women Die”: Violent Death in the Art of Abigail Lane and Jenny Holzer | Lisa Coulthard

8. Women and Murder in the Televirtuality Film | Jack Boozer

9. “I’m in There! I'm One of the Women in That Picture” | Margot Leigh Butler

15. In the Name of the Nation: Images of Palestinian and Israeli Women Fighters | Dorit Naaman

Prisoner dressed up with poodle at Kingston Prison for Women, c 1950

Kitchen at Kingston Prison for Women, 1961

Scene from Semiotics of the Kitchen, 1974

Jack Boozer is a professor in the Department of Communication at Georgia State University, where he teaches film studies, screenwriting, and adaptation. He has published widely on American film, including Career Movies: American Business and the Success Mystique. His work on individual films includes articles on The Crying Game, Thelma and Louise, and the history of femmes fatales. He is currently completing an edited book, The Process of Adaptation. His forthcoming articles include one on the year 1987 in Hollywood film for a series by Rutgers University Press.

Annette Burfoot is an associate professor in the Department of Sociology, Queen’s University,Kingston. She has published in the sociology of science and technology (as editor of The Encyclopedia of Reproductive Technologies) and on the representation of gender in science fiction and science-as-fact. She currently studies the formation of modern medical imaging as a historical cultural science study from the point of view of feminist materialism.

Frank Burke is a professor of Film at Queen’s University,Kingston. He has published Federico Fellini: Variety Lights to La Dolce Vita and Fellini’s Films: From Postwar to Postmodern and has co-edited Federico Fellini: Contemporary Perspectives. He provided the commentary (along with Peter Brunette) for the 2006 Criterion DVD release of Fellini’s Amarcord. He has published numerous essays on Italian and North American cinema and is currently writing a book for Edinburgh University Press on the Italian sword-and-sandal film of the 1950s and 1960s.

Margot Leigh Butler is a theorist, installation artist, and cultural activist. She has a Ph. D. in Media and Communications from Goldsmiths College,University of London, UK, with specializations in politics, philosophy, art, and science and technology studies. Her work has been published in Women’s Studies International Forum, West Coast Line, The Virtual Embodied, and elsewhere. She lectures in Europe and Canada and is part of the Kootenay School of Writing collective. She lives in Vancouver, where she is curating a reading series called “‘Tag, we're it!‘ or ‘Implicatedness. ‘”

Lisa Coulthard is an assistant professor of Film Studies at the University of British Columbia, Vancouver. She has published on Quentin Tarantino, John Woo,Abigail Lane, Kiki Smith, and Stan Douglas. She is currently working on a manuscript on love in contemporary European cinema.

Sylvie Frigon holds a Ph. D. from the Institute of Criminology at the University of Cambridge, UK. She is Professor and outgoing Chair of the Department of Criminology at the University of Ottawa. She has co-edited (with Michèle Kérisit) Du corps des femmes: contrôles, surveillances et résistances. She edited a special issue of the journal Criminologie: “L’enfermement des femmes au Canada: une décennie de réformes” and authored the book L’homicide conjugal au féminin: d’hier à aujourd’hui. She has also published a novel, Écorchées, on women in prison. She is currently working with Chris Bruckert and Nathalie Duhamel on the social and professional (re)integration of women in conflict with the law and on the issue of mental health of women during and after imprisonment. Dr. Frigon founded the research and action alliance La Corriveau, which is concerned with socially marginalized and criminalized women. She is finishing a manuscript on the body and imprisonment for the Autrement collection in Paris and is writing a book on dance, the body, and imprisonment with Claire Jenny, choreographer and director of the Parisian dance company Point Virgule.

Susan Lord teaches film and media cultures at Queen’s University in Kingston. Her main research areas are women’s film culture, Cuban visual culture, new media, and translocal artist collectives. She is co-editor with Janine Marchessault of Fluid Screens, Expanded Cinema and co-editor of Digital Poetics and Politics, a special issue of the journal Public. She has published widely on women’s film cultures. She is completing a manuscript about Sara Gómez and Cuban documentary in the 1960s.

Zoey Élouard Michele wrote her chapter in this volume, “Missing: On the Politics of Re/Presentation,” while enrolled as a doctoral student in the Department of Sociology at Queen’s University in Kingston, Ontario. In 2005, she left academic life to pursue a career in the skilled trades. She lives in Halifax, Nova Scotia, with her husband, René.

Belinda Morrissey teaches media and communication studies at the University of Canberra, Australia. She is the author of When Women Kill: Questions of Agency and Subjectivity, and has published articles in several journals, including Social Semiotics, Continuum, and Australian Women’s Law Journal. She is the author of a chapter in the forthcoming Inflections of Everyday Life.

Dorit Naaman is a film theorist and documentarist from Jerusalem and teaches at Queen’s University, Canada. Her research focuses on Middle Eastern cinemas (primarily from post-colonialist and feminist perspectives), and she is currently working on a book on the visual representation of Palestinian and Israeli women fighters. Her documentary work is about identity politics and the politics of representation, and she developed a format of short videos, DiaDocuMEntaRY.

Kathleen A. O’Shea, a nun for thirty years, is a social worker who does research on female offenders, with an emphasis on women on death row. She is a teacher, writer, activist, and lecturer with a great passion for what she does. She published Female Offenders: An Annotated Bibliography, Women and the Death Penalty in the United States: 1900–1998, and Women on the Row: Revelations from Both Sides of the Bars. She has recently finished a collection of stories of nuns who have befriended death row inmates. She lives and works at Innisfree Village, a lifetime facility for mentally handicapped adults in rural Virginia, and is currently working on Hymns of the Revolution, a novel based on her memoirs of Chile, 1965–1973.

Sharon Rosenberg is an associate professor at the University of Alberta, Edmonton, where she teaches in the theory/culture focus of the Department of Sociology. She works primarily in the areas of contemporary feminist and queer theorizing, trauma and memory studies, and pedagogy and culture. She is the editor of the special issue “Memorializing Queers/Queering Remembrances,” for torquere: Journal of the Canadian Lesbian and Gay Studies Association; is co-author of Troubling Women’s Studies: Pasts, Presents and Possibilities, with A. Braithwaite, S. Heald, and S. Luhmann, and is co-editor of Between Hope and Despair: Pedagogy and the Remembrance of Historical Trauma, with R. Simon and C. Eppert. Rosenberg’s current research considers the possibilities for non-indifference as a mode of living with and in regard for the legacies of those who have died violently.

Steven Jay Schneider is a Ph. D. candidate in Cinema Studies at New York University’s Tisch School of the Arts. His books include Horror International, Fear without Frontiers: Horror Cinema across the Globe, New Hollywood Violence, Horror Film and Psychoanalysis: Freud’s Worst Nightmares, Dark Thoughts: Philosophic Reflections on Cinematic Horror, Underground USA: Filmmaking beyond the Hollywood Canon, Traditions in World Cinema, and 1001 Movies You Must See Before You Die.

Jyotika Virdi, assistant professor at the University of Windsor, Ontario, teaches film/media studies. Her research interests include postcolonial cultural politics, and she has published essays in Film Quarterly, Jump Cut, Screen, and Visual Anthropology. Her book, The Cinematic ImagiNation: Social History through Indian Popular Films, is forthcoming from Rutgers University Press. Suzie Sau-Fong Young is an associate professor of cultural theory and film studies at York University, Toronto. She has an interest in practices of “place” (digital diaspora, national cinemas), inscriptions of “body” (cinematernity, Nature-tv), and theories of the “grotesque” (the pleasures of horror/David Cronenberg, the horrors of pleasure/Steven Spielberg).

The essays in Killing Women: The Visual Culture of Gender and Violence find important connections in the ways that women are portrayed in relation to violence, whether they are murder victims or killers. The book’s extensive cultural contexts acknowledge and engage with contemporary theories and practices of identity politics and debates about the ethics and politics of representation itself. Does representation produce or reproduce the conditions of violence? Is representation itself a form of violence? This book adds significant new dimensions to the characterization of gender and violence by discussing nationalism and war, feminist media, and the depiction of violence throughout society.

``Represents a significant contribution to the study of violence and women, one that offers productive avenues of development for the emerging fields of new media studies. ''

``Burfoot and Lord create a space where a critical visual vocabulary on gendered violence, gender and violence, and gender as violence are fused together. The presence of this compilation further demonstrates how the distinct paths of art, activism, and community intersect to challenge the boundaries of academic theory and practice. '' 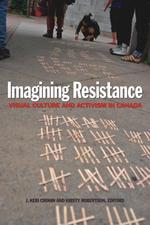