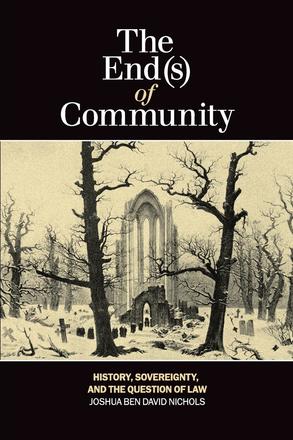 History, Sovereignty, and the Question of Law

Excerpt from The End(s) of Community: History, Sovereignty, and the Question of Law by Joshua Ben David Nichols

What are the limits of law? At first glance this question seems commonplace. After all there is no law without limitations. In order for law to function, its limits must be either determined or determinable. They are, quite simply, conceptually co-determined. Given this relation, it seems one could simply respond with a basic indicative “here” or “there,” as if responding to a tourist asking for directions. But if we pause and begin to consider this question a little more carefully, it quickly loses its everyday veneer. There is a troubling undercurrent to this question, one that echoes Antigone's animal-like cry, Leontius' irrepressible desire to see, or the ultimate fate of the officer in Kafka's “In the Penal Colony. ”1 This undercurrent shifts the very force and character of the question from the simple, everyday point of reference (i. e. , from the specific legal limits for a given activity to the imaginary lines that define a jurisdiction and the set of qualities that determine the “common” of community) to a radical contestation of the power to make law. As soon as we begin to attune our ear to this undercurrent, the simple response of “here” or “there” suddenly becomes abstract to the point of absurdity. We are drawn towards that which is set outside of the law—the king, the outlaw, and the scaffold—in an attempt to find the stakes of the question itself. However one chooses to answer this question—and we should note that it is one always already being both asked and answered—determines the line that both unites and divides sovereignty and democracy, force and law.

This text addresses the philosophical genealogies of these fundamental concepts in order to respond to the question. In particular it sets out to examine how the tradition of Western philosophy has accounted for the foundations of law, that is, for the movement from a “state of nature” to political order. Traditionally, the character of the “sovereign” or “lawgiver” has provided the solution to this problem. The sovereign sets the limits of the law by presenting its authority as natural or at the very least necessary, but this solution simply suspends or defers the question of the limits of law (i. e. , the line between force and law). Effectively, by proclaiming law, the sovereign faces the problem of responsibility. The solution to this problem has been the claim that the sovereign's relationship to the law is exceptional, that is, it may both found and enforce law, but it is not bound by it. This exceptional status requires an explanatory framework, as without one the claim to the rule of law is impossible to maintain. Quite simply, sovereignty requires a unified historical narrative to contextualize its foundations (i. e. , fate), give meaning to its future (i. e. , messianism), and thereby preserve its authority within the present. This requirement has effectively tied sovereignty to universal history̬or, to borrow Lyotard's terminology,”grand historical narratives”—at the conceptual level.

This line of inquiry is by no means easy. When we begin to question the historical foundations of the relationship between sovereignty and law, we are immediately confronted with a convoluted mixture of jurisprudence and theology. While it is possible to argue that this metaphysical component is merely a distraction, and that the true basis of both sovereignty and the legal order is simply violence, such a hypothesis is fundamentally incomplete. Simply dismissing metaphysics as a faÃ§ade renders one unable to account for the series of structural effects the foundational myth has within the system.

Myth serves to bind the sovereign and the community together—a classic example being the so-called “noble lie” in the Republic—and thus set the stage for the proclamation of laws that are received as more than a set of externally imposed limits. In the twinkling of an eye, individuals become moral subjects and the rule of the strongest becomes the rule of law. And this is not the end of the story. While any given mythology may serve to found law and convert force into law, it cannot simply be dispensed with once the foundation is in place, for it introduces a set of relationships and rules that must be maintained. Like the script for an elaborate stage play, it defines the scenes and sets the actors in motion.

Nevertheless, when one starts to question the logic of the play itself, it begins to unravel. When we leave the script and pose a simple and direct question, such as “Who are you to proclaim the law?” the sovereign is forced either to make the obvious tautological assertion “I am the King”—a kindness to remind us of our place within the script—or to simply change the scene and have us arrested and executed for high treason. It is violence that both founds and maintains the relationship that binds the play to the script. —And yet, paradoxically, it is acts of violenceand here I draw directly on Benjamin's use of the German term Gewalt—that strain this relationship to the point of unworking it. The magic circle that leads from the subject to the sovereign draws itself towards the limit in and through exercising the right to kill.

Table of Contents for
The End(s) of Community: History, Sovereignty, and the Question of Law, by Joshua Ben David Nichols

Section I: At the End(s) of Community

1. “Community, Number” and Democracy: An Excursus on the Politics of Fraternity

2. Keeping Time Beneath a Canopy of Skins: Reading at the Limits of Sense and Sign(s)in Augustine and Bataille

3. The Way Out Is Through: Sade's Novel and the Crime of Writing

4. Between Law and the Slaughterhouse: Kant, Fichte and the “Absolute” Right of Punishment

5. Between the Judge and the Executioner: Revisiting the Silent Foundations of Hegel's Moral Point of View

6. To Read the Writing of Right: An Excursus on Death and the Foundations of Law in the Penal Colony

This book stems from an examination of how Western philosophy has accounted for the foundations of law. In this tradition, the character of the “sovereign” or “lawgiver” has provided the solution to this problem. But how does the sovereign acquire the right to found law? As soon as we ask this question we are immediately confronted with a convoluted combination of jurisprudence and theology.

The author begins by tracing a lengthy and deeply nuanced exchange between Derrida and Nancy on the question of community and fraternity and then moves on to engage with a diverse set of texts from the Marquis de Sade, Saint Augustine, Kant, Hegel, and Kafka. These texts—which range from the canonical to the apocryphal—all struggle in their own manner with the question of the foundations of law. Each offers a path to the law. If a reader accepts any path as it is and follows without question, the law is set and determined and the possibility of dialogue is closed. The aim of this book is to approach the foundations of law from a series of different angles so that we can begin to see that those foundations are always in question and open to the possibility of dialogue. 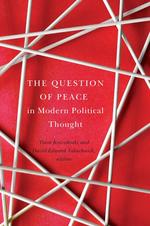