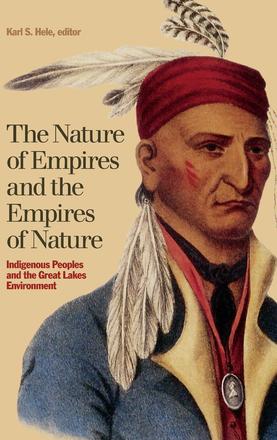 Excerpt from the Preface to The Nature of Empires and the Empires of Nature: Indigenous Peoples and the Great Lakes Environment edited by Karl S. Hele

This book, and the conference that sparked its creation, originated from John MacKenzie’s monograph Empires of Nature and the Nature of Empires (1997). 1 Growing up Anishinaabe in the Great Lakes, which are subdivided between two imperial—colonialist states, has made me intimately familiar with the natural world, its sublime power, and the ongoing attempts by states to impose their wills upon the land, water, and people. Displays of power both subtle and overt are a fact of life in the history and contemporary lives of Indigenous peoples in Canada and the world over. Denials by Prime Minister Stephen Harper of Canada’s colonial history are only the most recent examples of the dominant empire’s ignorance of its past. 2 Indeed, the prime minister’s insistance at a “historic” Crown—First Nations gathering on 24 May 2012 that the key piece of colonial legislation—the Indian Act—would remain is the most recent example. 3 Moreover the ignorance about First Nations and Aboriginal issues in Canada is best summed up by John Ivison’s opinion column in the National Post, where he notes that the chiefs continue to “air old grievances” while a “pragmatic PM looks ahead. “4 Ivison and many other Canadians fail to realize that the “pragmatism” evidenced by the prime minister is simply one element of the government’s historic and ongoing colonial relationship with First Nations. Canadians seem to think that France and Britain were the colonial powers and that the slate was wiped clean in 1867 with the birth of Canada as a nation. Sadly, this is a failure to grasp the reality that Canada and its provinces are and remain colonial empires with the subjugation of Indigenous population resting at the nation’s core.

Regardless of various attempts by “civilization” to control or thwart the empire of nature, nature has eons to achieve ultimate victory. The ruins of countless empires of man around the globe attest to this. An article in Discover magazine describes how nature would recolonize the environment once humanity is gone; many aspects of “civilization” would simply crumble with very fleeting physical records remaining of our presence within ten to twenty thousand years. 5 A similar conclusion is vividly presented in the 2009 television series airing on the History Channel titled Life after People. 6 Today, melting icecaps, disappearing bees, declining species, global warming, pollution, and increasing desertification are recognized as the result of humanity’s (read empire’s) attempt to promote itself over nature. Nature as an entity is damaged. Mother Earth cries in pain, her body and bones are contaminated and weakened, her blood increasingly poisoned, and her breath is becoming ever more fouled; yet, despite the accumulating evidence that empires of man are destroying our world, capitalism and its supporters continue to deny this basic fact. 7 Recent discussions about the seeming lack of will to explore and colonize space—apparently humanity’s long-term survival rests upon establishing off-earth settlements—only illustrate the failure to listen to the earth; such plans present empires with the opportunity to export their visions of dominance and subordination. 8 It is time we listened to those who speak to the earth and learn the lessons about how to live upon this planet without destroying it before ruining other worlds.

To Indigenous peoples, humanity is but one occupant of a diverse and interconnected world of beings that are bound together in a variety of known and unknown ways. This is often referred to as the circle of life, the circular movement of which can be seen in the movement of the seasons and animal life patterns, as well as a plethora of other cycles. Modern Western, and even Eastern societies, through the growing empire of statistics, are seeking ways in which to predict and eventually control the cycles of life as they are understood through a superimposed linear pattern. However, this effort is counterintuitive to the whirlwind of our existences. The sense of interconnectedness that shapes Indigenous interactions with the environment is key to understanding how to restore nature to its central position in the human relationship. Non-Indigenous people may scoff at the idea that rocks, trees, waterfalls, birds, bears, humanity, and all matter of life can be both animate and inanimate depending on the circumstances and essence of the thing, but the binary division of animate and inanimate, developed by Western thought as a way to categorize Indigenous belief and views of their natural world, fails to grasp the complexity of this knowledge while serving to belittle it in the process. To break this habit of mind that Western knowledge is supreme in all things, we must listen and hear what knowledgeable Indigenous people have to say. We must begin to cross the epistemological divide between Indigenous and non-Indigenous, or between the “modern” and the “other. “

MacKenzie’s work focuses on the environmental history of the British Empire and suggests fresh modes of analysis and connections with the Scottish experience. The Great Lakes region were a part of that empire, and many of its colonizing agents in the Americas were Scottish. 9 Therefore, Dr. MacKenzie’s work is directly applicable to the study of the Great Lakes watershed. This conclusion led to the call for papers for a conference sponsored by the former Atkinson Faculty of Liberal and Professional Studies at York University, Center for the Study of Indigenous Border Issues, and the Bkejwanong (Walpole Island First Nation) community. Papers presented at this conference took their cue from MacKenzie’s foundational studies. Drawing on both documentary and oral records, conference participants presented a series of papers that discussed the relationship between nature and empires in the context of the Great Lakes watershed. This volume in turn draws upon the conference’s theme, the papers presented there, and contributions solicited through a call for papers.

This volume has two primary objectives. First, it explores the power of nature and the attempts by empires (United States, Canada, and Britain) to control the environment. Second, it touches upon contemporary threats facing First Nations communities in the Great Lakes region from ongoing political, environmental, and social issues, as well as efforts to confront and eliminate these threats to peoples and the environment. These two objectives served as the focus of the papers presented at the conference and for those collected to form this volume. The resulting collection seeks to address the epistemological chasm between the cultures and nations living within the Great Lakes watershed.

Table of Contents for
The Nature of Empires and the Empires of Nature, edited by Karl S. Hele

2. Tricky Medicine: Something Old for Something New | Heather Marie Annis

5. Bridging Academia and Indigenous Environmental Science: Is It Too Late? | Brian Rice

7. Lines on the Land: Surveying Townships after the 1790 Treaty | Rhonda Telford

8. Poisoning the Serpent: The Effects of the Uranium Industry on the Serpent River First Nation, 1953–1988 | Lianne C. Leddy

12. Landscape and Mindscape Conjoined: The Empire of Nature and the Nature of Empires in the Journals of Ezhaaswe (William A. Elias) (c. 1848–1929) | David T. McNab

13. A World of Beauty: The Spirits within Nature in the Writings of Louise Erdrich | Ute Lischke

Drawing on themes from John MacKenzie’s Empires of Nature and the Nature of Empires (1997), this book explores, from Indigenous or Indigenous-influenced perspectives, the power of nature and the attempts by empires (United States, Canada, and Britain) to control it. It also examines contemporary threats to First Nations communities from ongoing political, environmental, and social issues, and the efforts to confront and eliminate these threats to peoples and the environment. It becomes apparent that empire, despite its manifestations of power, cannot control or discipline humans and nature. Essays suggest new ways of looking at the Great Lakes watershed and the peoples and empires contained within it.