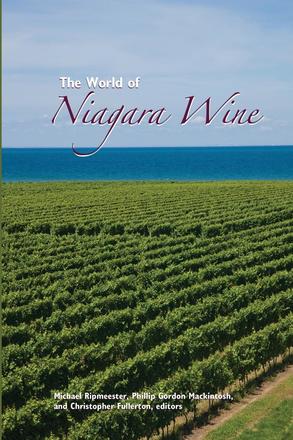 The World of Niagara Wine

Excerpt from Introduction to The World of Niagara Wine edited by Michael Ripmeester, Phillip Gordon Mackintosh, and Christopher Fullerton

Until it was recently replaced, a billboard proclaiming “Niagara Wine Country: More to discover” welcomed visitors and residents crossing into Niagara. Such a welcome was not always so specific. A scant forty years ago, this sign could have singled out the region's celebrated and thriving tender fruit industry, or even alluded to its strong manufacturing base. At that time, wine was hardly the symbol of Niagara, whose grape growers raised native Vitis labrusca grapes that, according to at least one observer, were suited only for making “jug wine” for a “pop-drinking public. ”1 By the early 1990s, however, grape growers and winemakers in Niagara had adopted new varietals and imposed new standards for winemaking. It was not long before people started to notice the improvements. In 1993, for instance, Ken MacQueen wrote in the Kitchener- Waterloo Record: “[C]learly something wonderful is happening here in Niagara. It's like returning to find that the snot-nosed brat next door has grown into the young Kate Hepburn. That the Baby Duck of our youth is now a swan, or at least a graceful GewÃ¼rztraminer—a wine much easier to pronounce after the second glass. ”2 Now, as we move into the second decade of this new century, grapes and wine busily consume the region's social, economic, cultural, and ideational resources, and preoccupy the imaginations of local governments, planners, and entrepreneurs.

Our purpose in this book is to explore the combination of nature and human effort that has shaped Niagara as one of Canada's leading grape-growing and wine-producing regions. If this statement is true, it is because of both policy and people. In a policy context, the Government of Ontario's wine strategy has “focus[ed] on securing a strong, prosperous future for the Ontario grape and wine industry” in order to fulfill a government commitment to make “the Ontario wine industry a thriving $1. 5 billion business [by] 2020. & rduqo; 3 With political support, Niagara wines are flourishing; the status of grape growing is less certain. All the while, Niagara-centred oenologists and oenophiles have scrutinized the Niagara wine industry and its burgeoning geography, publishing numerous Niagara wine books that include, but are hardly limited to, the following: Linda Bramble's Niagara's Wine Visionaries: Profiles of the Pioneering Winemakers; Rod Phillips's Ontario Wine Country; Walter Sendzik's Insider Guide to the Niagara Wine Region; Konrad Ejbich's A Pocket Guide to Ontario Wines, Wineries, Vineyards, & Vines; and Donald Ziraldo's Anatomy of a Winery: The Art of Wine at Inniskillin. 4 These, and books like them, play a crucial part in the construction not just of a wine industry, but of a wine imaginary in Niagara, at once social and geographical, scientific and cultural, economic and aesthetic.

The World of Niagara Wine is supported by the research efforts of local academics. Researchers affiliated with Brock University, Niagara College, and numerous other institutions conduct inquiries as varied as precision viticulture, the psychology of taste, sub-appellation, soil composition, and Icewine climatology, among others. In particular, Brock's multi-million dollar Cool Climate Oenology and Viticulture Institute (CCOVI) houses much of this scholarship. Since its founding in 1996, CCOVI's mandate has expanded to include scientific and social scientific research, with representation from Brock's Faculties of Applied Health Sciences, Business, Math and Science, and Social Sciences, as well as from independent researchers, authors, and consultants. 5 Yet despite Niagara's growing reputation as a centre of wine research excellence, the often breathtaking human and physical geographies of the region merely hint at the historical, economic, scientific, psychological, political, social, and cultural underpinnings of Niagara wine.

While acknowledging the worth of the efforts that have preceded it, The World of Niagara Wine fills a gap in the thinking about, and the ever-growing literature on, Niagara wines. It is the first to offer both an introductory and transdisciplinary accounting of the Niagara grape and wine industry, approaching the subject academically but for a wide and thoughtful readership. Our insistence on transdisciplinary approaches and our hopes of an audience both within and beyond the academy provides opportunities as well as challenges.

One of the goals of this book is to demonstrate that while the maturation of Niagara's grape and wine industry has done much to boost the region's economic fortunes and image, some uneasy tensions have emerged in this process. Few would suggest that the jobs created, the visitors attracted, and the libations concocted by Niagara wineries are in and of themselves negative: in fact, many in the region regard the continued growth of the industry as critical to the region's economic renaissance. As wine-lured visitors to the region are often unaware, the wine economy in Niagara has boomed as manufacturing has busted, with decades of factory closings and thousands of job losses. Similarly, producers and processors associated with the region’s once-thriving tender fruit industry—grapes, peaches, cherries, pears, berries, nectarines, plums, and so on—have borne the brunt of a changing global economy, and they see themselves as having little to gain from Niagara's wine economy. Tender fruit farmers, for example, who no longer have a market for their produce, consider switching to grape growing an expensive and risky proposition, and the skill sets of former factory workers are not those sought by wineries.

These tensions have certainly arisen and been on public display in the context of the ostensibly celebratory Niagara Wine Festival. The festival organizers' recent decision to change not only the event's name, from the original “Niagara Grape and Wine Festival,” but also to use it as a premier tourist attraction, has not been well received by all local residents. Many see these shifts as a not-sominor form of “treason& rduqo; against “Grape and Wine, & rduqo; the nickname for the sixty-year- old fall grape-and-wine bash. For these and many other reasons, the story of Niagara's transformation into a world-class wine region, as it is thus far written, is somewhat bittersweet. It is this bittersweetness that has prompted in the editors and authors of this volume a commitment to presenting a wide-ranging discussion—both critical and celebratory—of the world of Niagara wine.

In this context, The World of Niagara Wine contributes to the debate on the sustainable and inclusive economic, social, and cultural development of Niagara. However, the diverse group of authors participating in this project, the specific languages in which they speak and write, and the range of topics—from history to marketing to science to social and cultural critique—may give the book an uneven feel, albeit one necessary for representing this diversity of experience. To offset that perception, we offer a guide to what follows. To provide the reader with a general sense of the cultural, emotional, and institutional shape of grapes and wine in Niagara, and to make the transitions between styles and content less disruptive, we have organized the book into four subsections. The first, Niagara Wines Decanted, puts the region's grape and wine industry into historical and contemporary context. The second, Business and Bottles, builds a scaffolding around the business aspects of the grape and wine industry. The third section, The Vineyard to the Bottle, is the book's largest; it introduces readers to a combination of nature and science that makes Niagara wines unique. Finally, Section 4, A Cultural Perspective on Niagara Wines, peers into the Niagara grape and wine milieu with the critical gaze of the social sciences.

Map of the Niagara Region and Its Wineries

2 Niagara Wine and the Influence of the Government Regulation, 1850s to 1944 | Dan Malleck

4 The History of the VQA | Linda Bramble

7 The Hands behind the Harvest: Migrant Workers in Niagara's Wine Industry | Janet McLaughlin

Section 3: The Vineyard to the Bottle

11 Viticultural Practices and Their Effects on Grape and Wine Quality | Andrew G. Reynolds

17 Conflict in the Niagara Countryside: Securing the Land Base for the Wine Industry | Hugh J. Gayler

The World of Niagara Wine is a transdisciplinary exploration of the Niagara wine industry that celebrates and critiques the local wine industry and situates it in a complex web of Old World traditions and New World reliance on technology, science, and taste as well as global processes and local sociocultural reactions.

In the first section, contributors explore the history and regulation of wine production as well as its contemporary economic significance. The second section focuses on the entrepreneurship behind and the promotion and marketing of Niagara wines. The third introduces readers to the science of grape growing, wine tasting, and wine production, and the final section examines the social and cultural ramifications of Niagara’s increasing reliance on grapes and wine as an economic motor for the region. Preface by Konrad Ejbich.

"What sets The World of Niagara Wine apart is its voice and its perspective. It is authored by a group of deeply curious academics who have an abiding passion for wine and for all that happens in the Niagara Peninsula. This book is the fruit, so to speak, of their labour of love. ... Leafing once again through the manuscript to write these words, I feel as if I'm sitting in on a roundtable discussion with a group of like-minded folks, all talking about wines while sipping some. In fact, I recommend the same for you. Get yourself a glass of something local before curling up with this book to listen in on the conversation. "

- Konrad Ejbich, from the preface

"An academic paper on the Grande Parade? Hey, it's about time. ... It's one article of many contained in a recently published book, The World of Niagara Wine. ... Through 18 articles penned by 18 different writers, the book examines the history, business, science and culture of wine in Niagara. While some of the writings delve deeply into wine geekdom, most are accessible to the average slurper, and offer thought-provoking takes on the industry. "