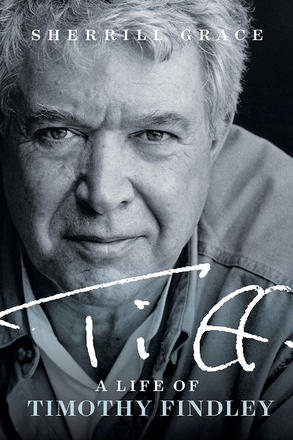 A Life of Timothy Findley

“Once before I die, I hope to know I’ve been heard. That’s all. ” — Timothy Findley

Timothy Findley (1930-2002) was one of Canada’s foremost writers—an award-winning novelist, playwright, and short-story writer who began his career as an actor in London, England. Findley was instrumental in the development of Canadian literature and publishing in the 1970s and 80s.

During those years, he became a vocal advocate for human rights and the anti-war movement. His writing and interviews reveal a man concerned with the state of the world, a man who believed in the importance of not giving in to despair, despite his constant struggle with depression. Findley believed in the power of imagination and creativity to save us.

Tiff: A Life of Timothy Findley is the first full biography of this eminent Canadian writer. Sherrill Grace provides insight into Findley’s life and struggles through an exploration of his private journals and his relationships with family, his beloved partner, Bill Whitehead, and his close friends, including Alec Guinness, William Hutt, and Margaret Laurence. Based on many interviews and exhaustive archival research, this biography explores Findley’s life and work, the issues that consumed him, and his often profound depression over the evils of the twentieth-century. Shining through his darkness are Findley’s generous humour, his unforgettable characters, and his hope for the future. These qualities inform canonic works like The Wars (1977), Famous Last Words (1981), Not Wanted on the Voyage (1984), and The Piano Man’s Daughter (1995).

" superb . .. Written with great sensitivity and attention to detail, Grace’s comprehensive biography succeeds in giving a complete picture of its subject as an individual and an artist. "

Sherrill Grace’s meticulously researched biography accesses “Tiff’s” extensive personal diaries and dozens of interviews to reveal the stories behind the Timothy Findley we thought we knew. One of Canada’s most perceptive literary scholars, Grace explores the genesis of Findley’s writing, provides astute analyses of all his fiction, and an illuminating, long overdue reassessment of Findley’s acting and playwriting. She traces his personal and artistic friendships with some of the giants of twentieth century culture, from Margaret Atwood to Sir Alec Guinness, and unpacks the complex family history that inspired the work and troubled the man: his loves and hates, his obsessions and neuroses. Findley emerges as not just a great novelist but a talented, dedicated man of the theatre, passionate human rights crusader, and fierce advocate of Canadian arts who went to war against war, political ruthlessness, homophobia and personal betrayal. A powerful, eye-opening portrait of the artist as an anguished man who tried desperately to live by his motto: Against despair. — Emeritus Professor of English and Theatre, UBC, editor of Modern Canadian Plays

“I was first drawn to Timothy Findley as a brilliant novelist, but over time I was privileged to know the man behind the novels. Despite a writer’s need for solitude, he was extraordinarily generous with his time and insight, and had a true talent for friendship and mentorship, qualities that shine through in this remarkable biography. Taking a cue from Tiff himself, Sherrill Grace never allows her meticulous research to overshadow the story of an extraordinarily engrossing, multi-faceted life. ”
– Sylvia Tyson, singer/songwriter, author of Joyner's Dream

"What a spectacular achievement! In “an ecstasy of exploration,” to use Sherrill Grace’s lovely description of Findley’s dogs criss-crossing a frozen river, one of Canada’s leading critics has created a definitive biography of a giant in Canadian literature. “We are what we keep” is the mantra informing her exhaustive attention to the details that shape and reflect the turbulent life of Timothy Findley or Tiff, as he was generally known. Sherrill Grace illuminates the private personal past that Findley’s fiction transforms into an urgent and unforgetable presence, like Chekhovian wildflowers in a stone orchard. Her version of a man sometimes obscured by his memories brings him to life and makes the fiction indelibly real. " -- John Moss, author of A Reader’s Guide to the Canadian Novel

“Tiff is a biography of becoming. Timothy Findley was a writer, but one who arrived at the vocation by way of the stage, a storyteller who shifted from the speaking of others’ words to the crafting of his own. Sherrill Grace brings thoughtful attention to both the man and the work, the latter of which notably marked the national literature by its particular obsessions and inventions. ”
– Andrew Pyper, author of The Demonologist and The Homecoming

" superb . .. Written with great sensitivity and attention to detail, Grace’s comprehensive biography succeeds in giving a complete picture of its subject as an individual and an artist. "

“A tactful, sensitive, generous, storyteller, Sherrill Grace recounts the life of one of Canada’s greatest storytellers, illuminating his life and work, the people he knew and the cultural times in which he performed that life so passionately. We follow him as he learns his craft through writing and through living that intense, well-examined, if often tormented, life. At once learned and elegant, this immensely readable biography is a glorious summing up of all the themes of his work and life. ” —Linda Hutcheon, University of Toronto, author of The Canadian Postmodern

Memory and remembering were central to Timothy Findley’s life and work—and equally to Sherrill Grace’s outstanding biography of the celebrated Canadian author. Drawing impressively and insightfully on a vast archive of letters, photos, journals, diaries, and interviews, and on her own towering talents as one of Canada’s foremost literary scholars, Grace presents a compelling portrait of a complex man and brilliant multifaceted writer—himself a master of auto/biography—whose professional and personal experiences tracked the far-reaching changes of late-20th-century Canada’s social and cultural landscape.

Cruel but Not Unusual