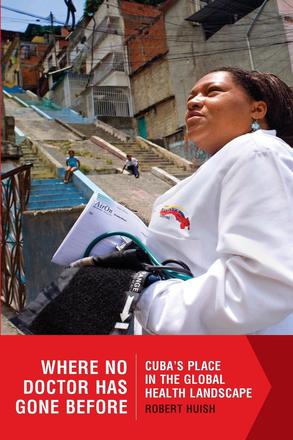 Excerpt from Where No Doctor Has Gone Before: Cuba's Place in the Global Health Landscape by Robert Huish

From the section entitled A Bold Act of Diplomacy in chapter 4 The New Doctor Blooms: The Ethics of Medical Education, pages 107 to 108

A Bold Act of Diplomacy

In 2001, ELAM scholarships were extended to students from the United States as well. A year earlier, Fidel Castro had travelled to the United States for the Millennium Summit at the United Nations. While there, he had travelled to Harlem to give a public speech at the church where he had stayed during another United Nations meeting in the 1960s. At that time, the United States had imposed a hotel embargo on the Cuban delegation, and they were forced to hole up in a church basement in Harlem. Castro never forgot the hospitality, and in 2000 he returned to the church to give thanks. The public speech attracted a massive audience, including members of the US Congressional Black Caucus, who met Castro personally. Members commented to Castro that they had heard much about the strength of Cuba's health-care system. They also mentioned that certain states, such as Mississippi and Louisiana, suffered an endemic physician shortage in rural areas. Others told Castro that health-care inequities in the United States disproportionately target the African-American population. Upon hearing the stories of massive health inequity within the United States, Castro offered five hundred scholarships for US students to come to ELAM (Castro, 2000). It was an offer that came from an economically hobbled country that had faced over forty years of aggression from the very country that was now seeking its help. The symbolic capital of a resource-poor country training physicians for the largest economy in the world was enormous.

The IFCO volunteered to handle the receipt of applications from US candidates before sending the portfolios on to ENSAP. The IFCO sought, but did not limit selection to, African-American and Hispanic students, women, and individuals coming from modest means. In addition to the application, candidates were invited to New York or California to participate in a three-day selection process involving an in-depth orientation on what to expect in Cuba. The first group was comprised of eighty-nine students from fifteen different locations. Enrolment to the programs has fl uctuated year-to-year; in 2006, only about twenty US students went to Cuba.

From the onset, the US students faced political challenges from their own government. Regrettably, the Bush administration, as part of a broader policy to restrict movement to and collaboration with Cuba, took harsh action against the ELAM students in 2002. The US Department of State and the US Treasury Department sent warnings to students stating that they could face jail sentences and fines upwards of $40, 000 for pursuing a medical education that contravened the Trading with the Enemy Act. In response to this threat, ELAM fast tracked the US students through their first year and encouraged them to return home until the political hostility subsided.

The IFCO and individual members of the Congressional Black Caucus lobbied Secretary of State Colin Powell, who then convinced the Bush administration to permit the US students to complete their medical degrees. Powell agreed that it was unconscionable to threaten medical students, ones dedicated to serving the underserved, with prison terms and stiff fines. By 2003, travel licences were permitted for US citizens to enter and complete their degrees at ELAM. Twenty-four students from the original eighty-nine did not return to Cuba after the exemption was made. Today, enrolment continues on with 115 US students registered at the school. Nevertheless, the US embargo against Cuba persists, and the US students endure prolonged separation from their families, which is compounded by poor access to communication and few chances to return home during their studies.

Table of Contents for
Where No Doctor Has Gone Before: Cuba's Place in the Global Health Landscape, by Robert Huish

1. Against the Garden Path That Justifies Health Inequity: Making the Case for Health Care as a Human Right

2. Sewing the Seeds of Health as a Right: The Origins of Health Care in Cuba

4. The New Doctor Blooms: The Ethics of Medical Education

5. The Blossom of Cooperation: Cuban Medical Internationalism through ELAM in Ecuador

6. The Fruit of Solidarity: How to Maintain Hope for Global Health

Tens of thousands of people around the world die each day from causes that could have been prevented with access to affordable health care resources. In an era of unprecedented global inequity, Cuba, a small, low-income country, is making a difference by providing affordable health care to millions of marginalized people.

Cuba has developed a world-class health care system that provides universal access to its own citizens while committing to one of the most extensive international health outreach campaigns in the world. The country has trained thousands of foreign medical students for free under a moral agreement that they serve desperate communities. To date, over 110,000 Cuban health care workers have served overseas.

Where No Doctor Has Gone Before looks at the dynamics of Cuban medical internationalism to understand the impact of Cuba’s programs within the global health landscape. Topics addressed include the growing moral divide in equitable access to health care services, with a focus on medical tourism and Cuba’s alternative approach to this growing trend. Also discussed is the hidden curriculum in mainstream medical education that encourages graduates to seek lucrative positions rather than commit to service for the marginalized. The author shows how Cuba’s Escuela Latinoamericana de Medicina (ELAM) serves as a counter to this trend.

An acknowledgement of Cuba’s tremendous commitment, the book reveals a compelling model of global health practice that not only meets the needs of the marginalized but facilitates an international culture of cooperation and solidarity.

``A strong addition to health care politics collections, much recommended. ''

``This excellent book gives us an immediate view and understanding of Cuba's commitment to and participation in medical internationalism. This small country has thousands of doctors around the world committed to the provision of health care. Its School of Latin American Medicine, opened in 1999, has taught medicine tuition-free to students from over 116 countries and graduated more than 12,000. Today, most of those graduates are back in their home countries working with the poor, often in areas that had seldom seen doctors. This is an endeavor, in short, from which even the U. S. might learn from Cuba's example. ''

``Robert Huish's Where No Doctor Has Gone Before: Cuba's Place in the Global Health Landscape is a powerful broadside against the enormous international inequities in access to health care, not just ignored but furthered by wealthy countries. ... It is an astonishing idea that a country with the population of Ontario and an economy less than one sixth of Ontario's should provide such an outsized share of all international medical aid. The idea gets as little attention as it does largely because of the influence of the Cuban exile community in the swing state of Florida, and the consequent debt of all recent American presidents, hawks and doves, to the Florida voter. Hence the never-ending embargo. ... [T]he central point of this fine work is crucially important: in a time of unprecedented disparity in global health outcomes, and while the International Monetary Fund insists on curtailing public health spending as one of the first steps in its oft-prescribed austerity measures, it is in the interest of countries that can help to help. The people who see this the clearest, are inevitably, the ones who are closest to that place of needing help. As it is with countries, so it is with individuals. ''