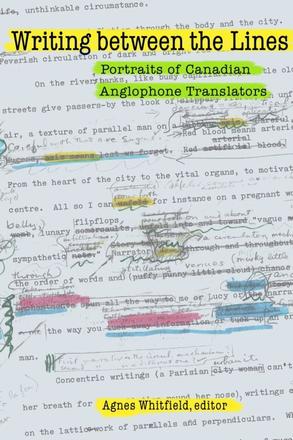 Writing between the Lines

Table of Contents for
Writing between the Lines: Portraits of Canadian Anglophone Translators, edited by Agnes Whitfield

On D. G. Jones and Translating Outside | Stephanie Nutting

Agnès Conacher is an assistant professor in the French Department at Queen’s University. She has published studies on Agrippa d’Aubigné, her area of specialization, and the nouveau roman (Claude Simon, Butor). She has also translated Mireille Calle Gruber’s article for The Hélène Cixous Reader and essays by Derrida for the journal Trois. Her current research focusses on mysticism, seventeenth-century women philosophers, and Cyrano de Bergerac.

Patricia Godbout is an associate professor of translation at the Université de Sherbrooke and a member of the Literary Translators’ Association of Canada. From 1986 to 1992, she was co-editor of ellipse, a literary magazine devoted to the translation of Canadian poetry. She is the author of Traduction littéraire et sociabilité interculturelle au Canada (1950–1960).

Pamela Grant is a professor and former director of the Département des lettres et communications at the Université de Sherbrooke, where she teaches courses in professional writing, editing, translation, and translation theory. She holds a PhD in linguistics from the Université de Montréal. A certified translator (OTTIAQ), she is a co-author of the Bibliography of Comparative Studies in Canadian, Québec, and Foreign Literatures / Bibliographie d’études comparées des littératures canadienne, québécoise et étrangères 1930–1995. The Québec English specialist for the Canadian Oxford Dictionary, she has published her work in a variety of scholarly publications in Canada, the United States, and Europe.

Barbara Kerslake holds a PhD from the University of Chicago. Her career as a translator began in 1979 with Harlequin Books. A freelance translator with the Secretary of State since 1983, she has also worked for the Canada Council and various academic publishers, translating from French to English. Her interests include Québec culture and literature, especially theatre, since she is also a playwright. Since 1986, she has taught translation at York University.

Jane Koustas is an associate professor in the Department of Modern Languages, Literatures, and Cultures at Brock University. Her articles on Québec theatre and translation have appeared in French Literature and Society, Québec Studies, Essays on Parody, Méta, TTR, and the University of Toronto Quarterly. A contributor to the Dictionary of Literary Biography, she is the co-author (with J. Donohoe) of Robert Lepage: Théâtre sans frontières. In 2002, she edited a special issue of TTR, Translation in Canada: Trends and Traditions.

Gillian Lane-Mercier is an associate professor in the Department of French Language and Literature at McGill University, where she teaches critical theory and twentieth-century French literature. Her current areas of research include translation studies, literary theory, reception theory, the contemporary French novel, and literary translation in Québec and Canada since 1960. Author of La parole romanesque and co-author of Faulkner: Une experience de retraduction, she has published numerous articles on the theory of the novel and in the field of translation studies. She is currently working on a book on contemporary Anglo-Québécois and Canadian novelist-translators.

Kathy Mezei teaches in the Department of Humanities at Simon Fraser University; she has published several articles on literary translation and the Bibliography of Criticism on French and English Literary Translations in Canada; she was one of the founding editors of Tessera, a feminist journal. She is part of the team, based at the Université de Sherbrooke, producing a database on Comparative Canadian Literatures and Translation Studies. Domestic Modernism, the Inter-War Novel, and E. H. Young, co-authored with Chiara Briganti, is forthcoming from Ashgate Press.

Stephanie Nutting is an associate professor in the Department of French Studies at the University of Guelph. Her main area of research is Québec theatre and poetry. She has published Le tragique dans le théâtre québécois et canadien-français, 1950–1989 and numerous articles in Voix et Images, the French Review, Spirale, the University of Toronto Quarterly, and other journals. She is president of the Association des professeur(e)s de français des universités et collèges canadiens.

Sherry Simon taught for many years at Concordia University. She is Canada Research Chair in Translation and Cultural History at Glendon College, York University. A member of the editorial board of the cultural magazine Spirale for more than ten years, she is the author or editor of numerous publications on feminist and postcolonial theories of translation, including (with David Homel), Mapping Literature: The Art and Politics of Translation, Le Trafic des langues, Culture in Transit: Translating the Literature of Quebec, and Gender in Translation: Cultural Identity and the Politics of Transmission.

Robert Wallace is Professor Emeritus of English and Drama Studies at York University. His books include Producing Marginality: Theatre and Criticism in Canada, The Work: Conversations with English-Canadian Playwrights (with Cynthia Zimmerman), Quebec Voices, Making Out: Plays by Gay Men, Theatre and Transformation in Contemporary Canada, and Staging a Nation: Evolutions in Contemporary Canadian Theatre. He has written and produced ten documentaries for CBC radio about twentieth-century performance and edited more than twenty volumes of Canadian plays for Coach House Press.

Agnes Whitfield co-ordinated the translation program at Queen’s University for ten years, and is now a professor and the former director of the School of Translation at York University. She has published ten books and over fifty articles on Québec literature and translation, including Le Métier du double: Portraits de traducteurs et traductrices francophones. Her most recent articles have appeared in Méta, the University of Toronto Quarterly, and international conference proceedings in Porto and Prague. Shortlisted for the Governor-General’s Award for Divine Diva, her translation of Venite a cantare by Québec writer Daniel Gagnon, she is a certified translator (ATIO). President of the Canadian Association for Translation Studies for two mandates (1995–99), she was Seagram Visiting Chair at the McGill Institute for the Study of Canada (2003–2004).

The essays in Writing between the Lines explore the lives of twelve of Canada’s most eminent anglophone literary translators, and delve into how these individuals have contributed to the valuable process of literary exchange between francophone and anglophone literatures in Canada.

Through individual portraits, this book traces the events and life experiences that have led W. H. Blake, John Glassco, Philip Stratford, Joyce Marshall, Patricia Claxton, Doug Jones, Sheila Fischman, Ray Ellenwood, Barbara Godard, Susanne de Lotbinire-Harwood, John Van Burek, and Linda Gaboriau into the complex world of literary translation. Each essay-portrait examines why they chose to translate and what linguistic and cultural challenges they have faced in the practice of their art. Following their relationships with authors and publishers, the translators also reveal how they have defined the goals and the process of literary translation.

Containing original, detailed biographical and bibliographical material, Writing between the Lines offers many new insights into the literary translation process, and the diverse roles of the translator as social agent. The first text on Canadian translators, it makes a major contribution in the areas of literary translation, comparative literature, Canadian literature, and cultural studies.

``Since the time of the inaugural funding of literary translations by the Canada Council in the early 1970s . .. many important assessments of the theory and practice of Canadian literary translation have been published. ... To that distinguished list of scholarly studies must now be added this recent work edited by Agnew Whitfield. ... Writing between the Lines is and will remain a useful and very informative collection of insights into the labours and achievements of some of Canada's most distinguished anglophone translators. ''

``This well-edited volume reveals the hidden humanity that enables cross-cultural communication. In the detail of lives, in the variety of backgrounds and goals, these biographies upset countless facile generalizations about translation and translators. They show why translation is so important to Canada, and why Canada is now important for translation. ''

``This book is a tribute to those who smuggle culture across the anglophone and francophone divide into Canada--the literary translators. ''

``Writing between the Lines will find a useful place on the shelves of students, researhers, and general readers interested in translation in Canada. ... The essays have been very consistently edited and are without exception interesting and detailed. ..[and] reveal the rich diversity in translation approaches. ''