Alain Gaudet grew up in various communities between Ottawa and Montreal, and after high school, in 1968, joined the Canadian military. After his regular and combat training he became a member of the Canadian Airborne Regiment, which gave him the opportunity to travel, both within Canada and internationally. Since leaving the military in 1976, Alain Gaudet has had a varied career. He lives in France. 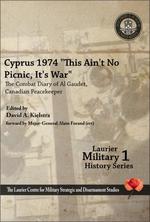