Carman Miller is the Chairman and Associate Professor in the History Department at McGill University. He holds the Ph.D. degree from King’s College, University of London. His previous publications include articles focusing on the career of Sir Frederick Borden, a Minister of Militia at the time of the Fourth Earl of Minto, and Canada’s participation in the South African War during Minto’s term of office as Governor–General. 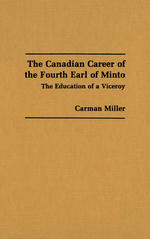 The Canadian Career of the Fourth Earl of Minto