Laurence F. Wilmot, M.C., was Warden Emeritus of St. John’s College, Winnipeg, Manitoba. During a pre-engineering year at university, he decided to train for the ministry. He served as a chaplain in the Canadian army from 1942-45, and was in Italy during the 1944-45 campaign. He was awarded the Military Cross in August 1944 and has received honorary Doctor of Divinity degrees from Trinity College, Toronto, and St. John’s College, Winnipeg. Laurence Wilmot passed away in December 2003 at the age of 96. 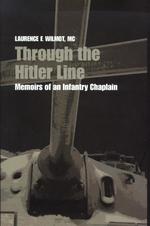 Through the Hitler Line