Get on transit or go outside and you’ll see many, maybe even most people plugged into their devices, absorbing music or a podcast. But an increasing number of them may be “reading”—an audiobook. A recent Toronto Star article confidently announced that the audiobook boom has arrived in Canada, after years of middling circulation and sales.

Scholarly work might not be top of mind when you think of audiobooks, but they’re an excellent fit for the format. Students, at the vanguard of multitasking, might want to plug in to their “readings” while commuting or performing household tasks. Hearing a work, rather than reading it, can help students remember it more clearly. And making course books accessible to students with visual or reading impairments is now required by many universities in Canada. 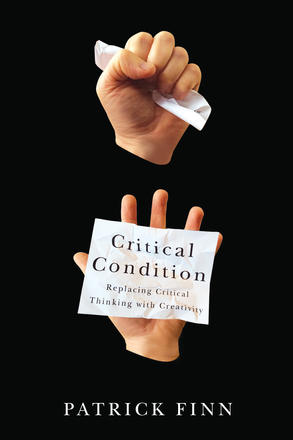 But the efficacy of listening to audiobooks—and understanding the words being spoken—isn’t a given, says Patrick Finn, a professor in The School for Creative and Performing Arts at the University of Calgary. With a good quality audiobook, there could be “actual improvements in knowledge dissemination and knowledge uptake,” says Finn. But the opposite is true: “if the quality is low, there can be more of a barrier to learning.”

Along with Wilfrid Laurier University Press, Finn has released the audiobook version of Critical Condition, his 2015 book that outlines alternatives to critical thinking in the academy. The book argues that adding a more open, loving system on engagement to the analytical toolbox can help us deal with our ever-growing, ever-quickening networks of information. The Critical Condition audiobook is available for free on the WLU Press site.

Universities and scholarly publishers can seize a huge opportunity to turn scholarly work into audiobooks, which is partly why Finn developed this project. He recruited a director and a sound engineer, and recorded Critical Condition at the University of Calgary. Using performance-based research to support the recording of the book supports a higher quality outcome for listeners.

University campuses are a logical place to produce audiobooks. Many students need access to the same book, and increasingly want or need their required texts in numerous formats. Universities usually have studios, high quality recording equipment, and personnel to produce these recordings. And most schools have a drama department with knowledge and expertise in performance, from which publishers can select the right voice actors to read the books.

Critical Condition was a good place to start exploring his work on audiobooks. It’s relatively short. As far as scholarly books go, it’s written in a conversational style. And Finn has studied performance for thirty years, so he not only knows the work he’s reading inside and out, but he knows how to read it.

Audiobooks require a uniquely intimate kind of performance. In most cases it’s a single reader speaking to a single listener. That means that even those who have lots of performance experience—stage actors, public speakers, or pundits—may need rigorous training and practice to read audiobooks effectively.

A good audiobook says Finn, needs “table work” similar to the early stages of putting on a play or filming a movie. That’s where performers sit together in the early stages of rehearsal to painstakingly go through every line, down to individual words and pauses, to tease out the meanings and sub-meanings in the text, and perhaps discover something new to convey a fresh message to your audience. For Finn and his team, it took a hundred hours of table work to prepare Critical Condition.

“You sit with a book, you go word by word, so that when you perform it you understand it. You have the expert there to make sure the reader understands each line.”

After this came the actual recording process. Despite Finn’s training as a professional singer, performer, and ample performance experience and study, he was shocked by how frequently he had to take breaks. Not only is straight reading from a prepared text draining—in a way that public speaking or singing are not—but Finn also found that the quality of his voice would go down very quickly. “When you’re doing an audiobook – when you’re reading for the maximum clarity, vocal quality degrades quickly and the mics pick it up.”

When a reader gets tired, her voice tends to come from their throat, rather than from her diaphragm. And this tonal quality tends to lend an ‘untrustworthy’ quality to a voice. “If you can’t trust it, you won’t hold on to the content,” says Patrick. You don’t get the same learning from that work.”

At the same time, there is more than just technical parts of a good audiobook performance. A person who understands a subject deeply may be able to convey meaning better than a performer well-versed in audiobook performance. “You may talk about it in a way that you’ll skip over crucial meaning. The words might sound fine, but people won’t understand it as well.”

Patrick likens this to wedding speeches, where a confident public speaker might get more laughs, but someone with less apparent polish might say something that makes you tear up. In Critical Condition, he describes a professor from his undergraduate years who held students rapt with his traditional lecturing style:

He read from detailed notes for each lecture he delivered. He never looked up, he kept the room dim and only had a small lamp on his papers, and he never veered from his prepared notes. The class was extraordinary. Why? His ideas were bold and continually evolving … No amount of edutainment would have drawn us away from these quiet, methodical lectures.

“Vocal quality is not about the person who has the voice,” says Finn. “It’s when they read, do they connect with their audience. If you capture that, then that’s everything.”

He is excited to hear what people think of this audiobook. “We’ll get negative feedback, but that’s what will make this beneficial. If, for example, a person says it’s important not to be too aggressive, then people can point to a particular moment and make a useful discovery.” Because of this, Finn decided not to do too much post-processing to remove minor infelicities and smooth out every moment.

“A great sound engineer can go and do a lot of cheats, but we didn’t do that,” he says. “We did a high quality recording, but within it, we did not do a bunch of processing. Instead of polishing it up afterward, we wanted to demonstrate the differences at certain moments.”

This being a pilot project, Patrick hopes it can be a learning tool—for himself and his team, and other scholars interested in the audiobook medium. In addition to recording the work, Patrick, his director, and his sound engineer, all kept journals of their thoughts, reflections, and experiences while going through the project. They took hundreds of hours of video of the entire process, from the preparatory table work to the recording to the final editing process. Patrick is now developing these into a comprehensive guide on how to turn a scholarly book into an audiobook.

Creating an audiobook costs a lot of time, effort, and money. Getting institutional buy-in to use university resources can help lower overhead, says Patrick, and it can help fulfill one of the modern university’s key missions: improving knowledge dissemination, which is also becoming a requirement when it comes to winning grants and research funding. And because universities are required to make resources accessible to students in multiple formats says Finn, why not produce the highest quality audiobooks that you can?

“If this can make an important piece of research more understandable by even a few percentage points, then you might be moving the needle of knowledge dissemination.”