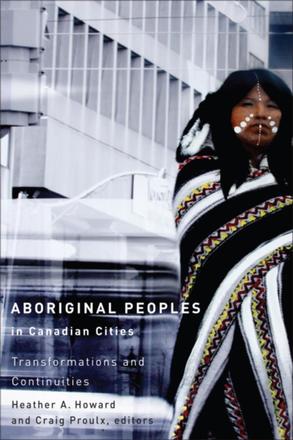 Table of Contents for
Aboriginal Peoples in Canadian Cities: Transformations and Continuities, edited by Heather Howard and Craig Proulx

Transformations and Continuities: An Introduction | Heather A. Howard and Craig Proulx

The Papaschase Band: Building Awareness and Community in the City of Edmonton | Jaimy L. Miller

“Regaining the childhood I should have had”: The Transformation of Inuit Identities, Institutions, and Community in Ottawa | Donna Patrick, Julie-Ann Tomiak, Lynda Brown, Heidi Langille, and Mihaela Vieru

The Friendship Centre: Native People and the Organization of Community in Cities | Heather A. Howard

Challenges to and Successes in Urban Aboriginal Education in Canada: A Case Study of Wiingashk Secondary School | Sadie Donovan

“Why Is My People Sleeping?”: First Nations Hip Hop between the Rez and the City | Marianne Ignace

Lynda Brown was born in Nunavut, and her family originates from Pangnirtung and Scotland. She lived mainly in Alberta and Ontario while growing up. Upon graduating from Trent University with an Honours B. A. in Native studies and psychology, she moved to Ottawa. Lynda volunteers her time, focusing on Inuit women, children and affordable housing. Lynda is a traditional throat singer and drummer, and shares her cultural knowledge through demonstrations and workshops.

Kathleen Buddle is an associate professor of anthropology at the University of Manitoba. Her research addresses First Nations media activism in Canada; cultural performance and politics in urban Aboriginal localities; Native street gangs, the manufacturing of prairie lawlessness and disciplining of the bodies of criminal others; and the authorizing of new social categories by Native women’s organizations as they struggle to shift public debates about Native families onto more productive terrain.

Regna Darnell is Distinguished University Professor of Anthropology and First Nations Studies at the University of Western Ontario and holds a cross-appointment in ecosystem health in the Schulich School of Medicine and Dentistry. She has published widely in First Nations languages and cultures, especially Anishinaabeg and Plains Cree.

Sadie Donovan is a Ph. D. student of Anglo-Celtic settler ancestry. She is completing her degree at Simon Fraser University in British Columbia and is interested in research pertaining to the equitable education of Aboriginal youth.

Lindy-Lou Flynn is a cultural anthropologist who has conducted fieldwork in Aboriginal communities for over twenty years, primarily in western Canada. Her focus is on the healing and empowerment movement initiated by Native people in their ongoing recovery from colonialism. She is a full-time instructor of anthropology and Native studies at Keyano College in Fort McMurray, Alberta.

Marianne Boelscher Ignace teaches at Simon Fraser University. Her interests include the politics and negotiation of meaning in indigenous-language discourse and knowledge systems, including ecological knowledge. She has carried out long-term collaborative ethnographic and linguistic research with the Secwepemc and Haida peoples, which has resulted in various monographs, journal articles, and book contributions.

Heather A. Howard teaches at Michigan State University and is affiliated faculty with the Centre for Aboriginal Initiatives at the University of Toronto. Her research examines the politics of knowledge production and practice in community-based health education, social service delivery, and indigenous historiographies of urban space. She is the co-editor of Feminist Fields: Ethnographic Insights (1999) and Keeping the Campfires Going: Native Women’s Activism in Urban Areas (2009).

Heidi Langille, with roots in Nunatsiavut (Northern Labrador), has been a “life-long Urban Inuk. ” She has travelled across the North in different capacities, meeting new people and learning from them. Heidi volunteers her time, with a focus on children and affordable housing. She has given many presentations and interactive demonstrations on Inuit culture, heritage, values, and beliefs, including traditional throat singing.

Darrel Manitowabi is an assistant professor of Native studies at the University of Sudbury College, Laurentian University. He is a citizen of the Wikwemikong Unceded First Nation and currently resides on the Whitefish River First Nation. Manitowabi’s research interests include indigenous well-being, indigenous anthropology, Anishinabe Kendasawin (Ojibwa knowledge), and indigenous-state relations.

Jaimy L. Miller is from Edmonton, Alberta, and is a descendent of the Papaschase Band. She completed her M. A. in anthropology in 2006 and her master of public administration in 2010. She is currently working in the field of Aboriginal relations in Edmonton.

David Newhouse is Onondaga from the Six Nations of the Grand River near Brantford, Ontario. He is chair of the Department of Indigenous Studies at Trent and an associate professor in the Business Administration Program. His research interests focus on the development of modern Aboriginal society. He visits Starbucks as often as possible.

Donna Patrick is a professor in the School of Canadian Studies and the Department of Sociology and Anthropology at Carleton University, Ottawa. Her current research focuses on urban Inuit and more specifically on Inuit literacies and community-based activities, which connect Inuit in Ottawa to the arctic. Other interests include indigenous rights and language rights, and language endangerment discourse, including the political, social, and cultural aspects of language use among indigenous peoples in Canada.

Craig Proulx is an associate professor in the Department of Anthropology at St. Thomas University in Fredericton, New Brunswick. His research focuses on Aboriginal peoples in Canada (urban and rural), legal anthropology, anthropology of sport, anthropology of media, and critical discourse analysis. His book Reclaiming Aboriginal Justice, Identity and Community is based on fieldwork with the Community Council Project in Toronto.

Julie Tomiak is a Ph. D. candidate in Canadian Studies, with a specialization in political economy, at Carleton University. Her research focuses on the changing relationships between indigeneity, space, public policy, and rights. Her dissertation examines how neoliberal state rescaling and indigenous struggles for self-determination intersect in Ottawa and Winnipeg.

Mihaela Ecaterina Vieru is a Ph. D. candidate in the program of Canadian Studies, with a specialization in political economy, at Carleton University, Ottawa. She has an M. A. degree in Canadian studies from Carleton University (2006). Her research interests focus on ethnicity, multiculturalism, integration, citizenship, and national security in Canadian and international contexts.

``An important, well-written collection of papers which ought to be compulsory reading for all serious scholars of contemporary Aboriginal affairs. ''

``Research with and by Aboriginal peoples in urban contexts across Canada, mainly using ethnographic methods or essays based on lived experiences, reinforces the authority of each of the book's 12 chapters. Summing Up: Recommended. All levels/libraries. ''

``In some respects, this comprehensive anthology represents the cutting edge in a growing field of study related to urban Aboriginal communities in Canada. With a focus ranging from Toronto to Vancouver, the book contains fascinating new studies, including the experiences of Aboriginal employees at Ontario's Casino Rama, the rebuilding of Papaschase First Nation in Edmonton, and how Plains culture has been adopted as a form of healing in Vancouver. While the authors acknowledge the absence of voices addressing the Atlantic provinces and Quebec, this is offset by the strength of offerings from the Prairies, which include a textual analysis of media racism, a focus on Aboriginal street gangs, and an exploration of hip-hop culture. Notably, in a context in which Inuit communities are often ignored, the book includes a study of Inuit communities in Ottawa. ''