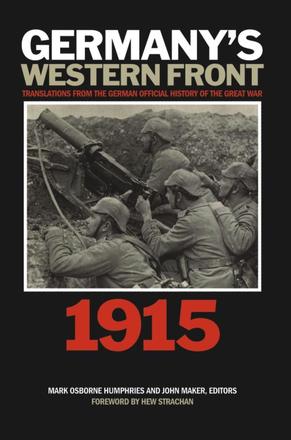 Translations from the German Official History of the Great War

Table of Contents for
Germany's Western Front: Translations from the German Official History of the Great War 1915, edited by Mark Osborne Humphries and John Maker

A Note on the Translation and Sources

PART I: WINTER AND SPRING

1. The Question of the War’s Centre of Gravity in January

2. The Western Front to the Middle of April

Decision-making at the OHL

Operations on Western Front until the Middle of February 1915

The Battle of Soissons

The Winter Battle in the Champagne

Intentions of the French Commanders in the Champagne

The Battle at Neuve Chapelle

The OHL’s Return to the Western Front

3. The Change in Falkenhayn’s Plans

The Creation of the New GHQ Reserve

The Plan to Mount a Decisive Breakthrough Operation in the West

The Political Situation and its Influence on the Military Decision-Making

To the Dardanelles Offensive

To the Employment of the GHQ Reserve in the East

4. The General Situation of the Central Powers in May

The Intervention of Italy

The Intensification of the Economic Situation and Economic Warfare by Submarine

The Manpower and Ammunition Situation to the End of the Year

5. The Western Front from the Middle of April to the Beginning of August

The OHL and the Western Army in April

The Offensive Battles of the Armee Abteilungs Strantz and Gaede

The Beginning of the Spring Offensive in the Artois

Sixth Army’s Battles from 9–14 May

The Renewal of the Major Offensive in the Artois: Operations from 16–18 June to the End of the Spring Offensive

The Reorganization of the Western Army Part I: Until the Beginning of August

6. Overview of the Multi-Front War During the Summer

The General Situation to the Beginning of August

Shifting the War’s Centre of Gravity

7. Overview of the Military Situation to the Middle of September

8. The Western Front from Mid-August to the Beginning of the Autumn Offensive

The Enemy’s Situation and Plans in the Summer

The OHL from August to 22 September

The Events on the Western Front until 22 September

On the Remainder of the Western Front

9. The Autumn Offensive in the Artois and Champagne

The OHL until Noon on 25 September

The 25th of September

The Attack in the Artois

The Attack in the Champagne

Actions of the OHL during the afternoon of 25 September

The Situation at the OHL

The Further Course of the Battle until the end of September

In the Artois: Operations, 30 September–10 October

In the Champagne: Operations, 11–13 October

In the Artois: Operations, 30 September–10 October

In the Artois: Operations, 11–13 October

In the Champagne: Operations, 30 September–5 October

In the Champagne: New Major Offensive Operations after 6 October

The Enemy’s Situation at the End of the Offensive

Lessons Learned from the Fall Offensive

10. The Western Front to the End of the Year

Operations of the Remaining Armies until mid-October

The Reorganization of the Western Army Part II

Operations from mid-October until the End of the Year

The Situation at the OHL in November and December

Appendix 1: A Comparison of German, British, and French Artillery in the Spring Battles in the Artois

Appendix 2: A Comparison of German, British, and French Artillery in the Autumn Battles

Appendix 3: A Comparison of Forces at War’s Beginning and the end of 1915

Appendix 4: Overview of Powder and Munitions Production from War's Beginning to the End of 1915

Appendix 5: Standing Orders for the Defence in the West

The first English-language translation of Der Weltkrieg, the German official history of the First World War.

Originally produced between 1925 and 1944 using classified archival records that were destroyed in the aftermath of the Second World War, Der Weltkrieg is the untold story of Germany’s experience on the Western front, in the words of its official historians, making it vital to the study of the war and official memory in Weimar and Nazi Germany. Although exciting new sources have recently been uncovered in former Soviet archives, this work remains the basis of future scholarship. It is essential reading for any scholar, graduate student, or enthusiast of the Great War.

This volume focuses on 1915, the first year of trench warfare. For the first time in the history of warfare, poison gas was used against French and Canadian troops at Ypres. Meanwhile, conflict raged in the German High Command over the political and military direction of the war. The year 1915 also set the stage for the bloodbath at Verdun and sealed the fate of the German Supreme Commander, Erich von Falkenhayn. This is the official version of that story.

Co-published with the Laurier Centre for Military, Strategic and Disarmament Studies

``Invaluable only starts to underline the value of this book to those interested in Germany at War 1914–1918. ''

``In April 1945 . .. when the Royal Air Force bombed Potsdam . .. [the German] National Archive was destroyed. ... Even allowing for the survival of other material in places such as Munich, and the return to Germany in the 1990s of documents siezed by the Soviets, historians working on the German army in the First World War are at a disadvantage compared to those studying the British, French, US, Australian, or Canadian armies. This means that Der Weltkrieg, the series of German official histories which drew upon now vanished material, assumes a far greater importance than, for example, the comparable British volumes edited by Sir James Edmonds, or Charles Bean's Australian offical account. As Hew Strachan points out in a perceptive foreword, Der Weltkrieg is not as well-known in English-speaking circles as it should be. One reason why people may have shied away from it is fear that its interpretations were contaminated by the authors' desire to stay in step with the Nazie regime. As both Strachan and the editors demonstrate, this is simply not the case. The second reason is the language barrier. Until now, the German official history has not been translated into English. The appearance of this volume, the first in a series, represents a very significant moment in the evolving Anglophone historiography of the Great War. ... Although, like most official histories, it is rather dry in tone, the book reads well, something for which the editors and their translators, Wilhelm J. Kiesslebach, Peter Meinlschmidt, and Ralph Whitehead, deserve high praise. ... The editors' helpful footnotes—which include references to modern research—enhance the value of the book. ... By putting such a wealth of information from the German side at the disposal of English-speakers, Humphries and Maker have made an important contribution to achieving greater understanding of this critical year in the Great War. ''

``Offers a rare insight into Germany's official history. ... There are virtually no documents from World War I because World War II destroyed them. The German Official History is as close to those documents as anyone can get [and] until now it has never been available in English. ... [I]t is the definitive presentation of the German view of 1915 on the Western Front. ''

``Masterfully edited and translated by a team of scholars that only a university press . .. could assemble. That dedicated effort includes reproduction or adaptation of very fine maps used in the German tomes. ... By any measure, this volume is exceptionally well done and belongs on the bookshelf of scholars, serious students and dedicated World War I buffs. It is recommended highly. ''

``For far too long, English-language historians of the Great War have been without a solid understanding of the ‘other side of the hill.’ Germany's Western Front fills this gap admirably. Its clear and readable translations of the German official history illuminate Germany's struggle against the armies of the British and French Empires on the Western Front and provide English-language historians with a much-needed view of the German perspective of the war. However, Germany's Western Front is more than simply a translation, its lucid introduction and thoughtful annotations provide valuable context for and many important insights into German operations. This is a book that every serious student of the First World War will want to read and return to over and over.''

``For over ninety years, the German forces in the Great War have been obscured on the other side of a historical No Man's Land. But now, in this monumentally important work, expertly translated and edited, English-speaking military historians will better understand those forces against which the British, Canadian, and other allied armies fought and died in the trenches on the Western Front. Germany's Western Front, and the volumes that will follow, will be required reading for historians of the Great War.''

``[This] English [translation of] the multivolume official German history of the war (Der Weltkrieg) is ... especially welcome.... The series features a laconic yet compelling operational narrative spliced with analytical chapters evaluating the options and decisions of the German High Command. Germany's Western Front: 1915 is, in fact, a compendium of three volumes dealing with perhaps the Western Front's bloodiest year: the year trench warfare began, the year poison gas was first used, the year a series of decisions set Germany on the road to Verdun. Generous explanatory footnotes from volume editors Humphries (Mount Royal College, Alberta, Canada) and Maker (ABD, University of Ottawa, Canada) clarify the material.... Indispensable.'' 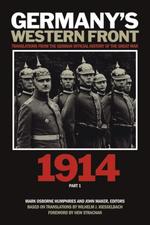 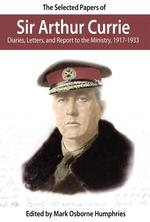